Work on self-government for Nunavik will continue: Makivik 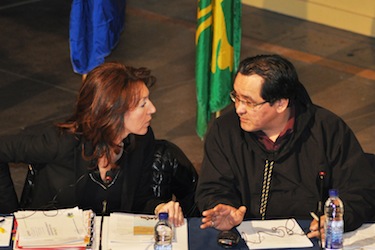 KUUJJUAQ — Nunavimmiut will continue to work towards self-government, despite saying a clear “no” to a proposed Nunavik Regional Government this week, says Makivik Corp. president Pita Aatami.

The region’s April 27 referendum sunk a proposal to merge existing regional organizations and set up a new Nunavik Assembly, after two-thirds of voters said “no” to this plan.

If the “yes” side had won, there would also have been further negotiations needed to give the NRG more powers, Aatami said.

“We wouldn’t have been at a stage where we could say that we had our own government yet,” Aatami told Nunatsiaq News in an interview from Montreal. “We’ve been in discussions for over four years on this – what’s another few months or years?

Aatami said the referendum result came as no surprise.

The concerns that people raised about protecting the Inuit language and culture were legitimate, he said, because the content and direction of the second round of negotiations were “unknown.”

But many people misunderstood the final agreement, or didn’t give themselves the time to absorb its contents, he said.

“In no way were we even trying to give up rights that Inuit have under the James Bay agreement,” Aatami said. ‘We were very clear, form the beginning, that further negotiations would [determine our autonomy].”

Aatami defended the process adopted by the negotiators.

Aatami said Nunavimmiut had the chance to stay informed through the NRG website and could ask questions in person during a field trip to Nunavik communities this past February and March.

Asked if the NRG Facebook group had anything to do with the “no” vote, Aatami said he was aware of resistance to the final agreement even before that group had formed.

“I had an inkling, from all the people I was speaking to,” he said.

Aatami said he was pleased to see Nunavimmiut participate in the referendum’s democratic process.

“I’m very happy with the turnout,” Aatami said of the 54 per cent voter turnout in the referendum. “We want people to get out and vote and they spoke loud and clear.”