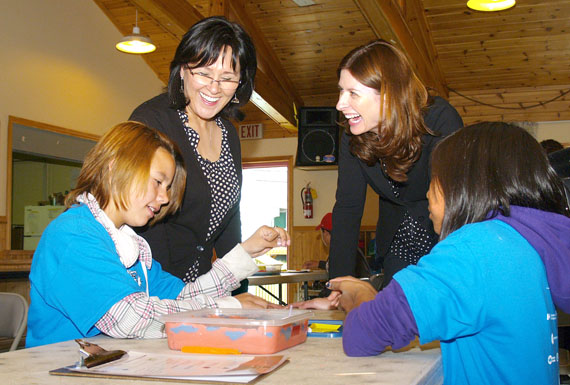 Leona Aglukkaq, the federal health minister and Nunavut’s MP, and Jennifer Flanagan, the president and CEO of Actua science camps, watch kids at Iqaluit’s parish hall do an activity July 14. Aglukkaq annouced $600,000 in federal funding over three years to support the Actua camps, which take place in nearly a dozen communities across Nunavut. (PHOTO BY CHRIS WINDEYER)

Participants in this week’s health careers camp at Iqaluit’s Nunavut Arctic College campus learned about anatomy the hands-on way — by dissecting a seal and looking at its organs.

It’s the perfect kind of activity to prepare future doctors, nurses and other health professionals — and in Iqaluit, participants also planned to make a mock skeleton, learn how to sew stitches and tour of the Qikiqtani Regional Hospital.

Similar camps are being offered for youth 11 to 13 in Cambridge Bay, starting July 23, and in Rankin Inlet, starting August 9.

Nunavut’s health and social services department and NAC hope the camps will encourage more young Inuit to aim for a career in the health professions— in Nunavut.

“There was a lot of debate about what age group to target but probably in the Grades Six and Seven was ideal because students are still typically in school, and if you can show them the value of taking science at the higher levels, they will do so,” said Fiona Buchan-Corey, the NAC campus director in Cambridge bay, who encouraged her own daughter to sign up for the program. “It’s a great opportunity.”

Not every camp will be exactly the same, according to the non-profit group Actua, which is delivering the program for the Government of Nunavut and the NAC.

But camp participants can look forward to practicing plaster casting and administering medication.

They’ll learn the basics of epidemiology through role-playing games that demonstrate how germs spread.

They’ll find out what an X-ray technician does— and make their own simulated x-rays using photo sensitive paper.

And they’ll also discover the roles of other public health professionals including occupational therapists, speech therapists, and nutritionists.

Over the course of the week, they will meet with Inuit health care professionals and hopefully be inspired to follow their footsteps.

The camps close with a community open house event, where camp participants will showcase what they learned.

There are still spaces for Cambridge Bay’s health careers camp, which will take place at the NAC, Buchan-Corey said — and the camp is free-of-charge to all eligible youth.