New Inuit art exhibit a mix of traditional and modern 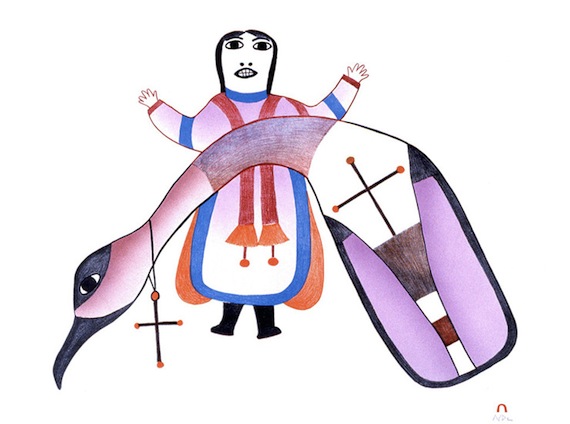 In “Arctic Allegory” from 1982, Pudlo Pudlat shows an Inuk woman in robes peers out from behind a giant goose with a crucifix around its neck. 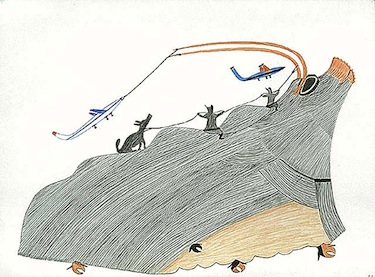 In “Winds of change” from 1985, Pudlat draws a musk ox with horns anchoring a plane and a sled dog. 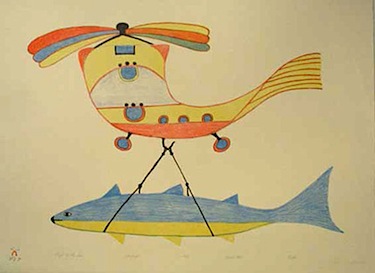 “Flight to the sea” from 1986 shows Pudlo Pudlat’s brightly-coloured drawing of a bird-like helicopter carrying a giant fish.

If you’re in Iqaluit, take some time to stop by the Nunatta Sunakkutaangit museum and enjoy an exhibition of prints and drawings by the late Cape Dorset artist Pudlo Pudlat.

The current exhibition and sale of Pudlat’s work features bold and dramatic works, whose subjects seem more colourful and larger than life.

Brian Lunger, the museum’s manager and curator, says he chose Pudlat’s later works for the show to display the “fantastic spin” Pudlat put on his Arctic subjects — whether these were airplanes or animals.

“I really like his mixed-tradition works,” Lunger said. “They show his fascination with the non-Inuit world that would become his own world.”

Pudlat’s work illustrates the shift from a traditional to a modern lifestyle, which he saw when he began drawing during the late 1950s.

And it’s clear from looking at his works that Pudlat was drawn to technology, because airplanes and other new sights keep cropping up alongside more traditional tools and activities.

For example, Flight to the sea shows a brightly-coloured drawing of a bird-like helicopter hauling a giant fish. That work was issued for Expo 86 in Vancouver.

And, in Winds of change, Pudlat draws a musk ox with horns anchoring a plane and a sled dog held by two hunters.

In Arctic Allegory, a woman in robes peers out from behind a giant goose with a crucifix hanging around its neck.

Pudlat’s rise as an artist could almost be credited to his poor health: it was only when Pudlat, by then in his 40s, travelled to Cape Dorset to be treated for tuberculosis that he came into contact with the West Baffin Eskimo cooperative.

Pudlat began as a carver, but an arm injury forced him to explore drawing, print-making and painting.

He often travelled south and elsewhere in the Arctic for medical treatment — the airplanes he flew in played greatly into his work.

Pudlat’s worked gained him attention and he became the first Inuk artist featured in a solo show at the National Gallery of Canada.

Lunger said Pudlat is one of the earlier artists to be featured at the Nunatta Sunakkutaangit museum, which usually shows more contemporary work.

“So much work from [Pudlat’s] time period gets shipped out of the territory,” Lunger said. “Many people never get a chance to even see it.

“But it’s interesting for younger artists to see some of the creativity of the first generation of Cape Dorset artists.”

The exhibition is open to the public, free of charge, until June 19.