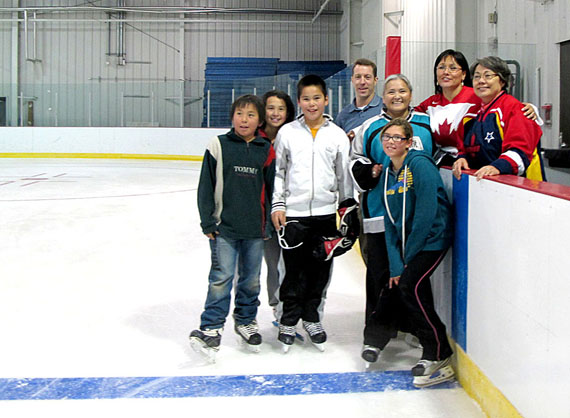 After a seven-year wait, the floor of Iqaluit’s Arctic Winter Games arena is once again covered with ice, following its official re-opening Oct. 13.

To mark the re-opening of the facility, the three most powerful women in Nunavut, Nunavut MP Leona Aglukkaq, Premier Eva Aariak and Mayor Elisapee Sheutiapik each sported hockey jerseys from their respective jurisdictions: Canada, Nunavut and Iqaluit.

In 2009, each of the governments they represent ponied up nearly $750,000 each to repair the damaged foundation and ice surface inside the AWG.

Sheutiapik, well known in Iqaluit as an enthusiastic hockey-mom, and said with a broad grin, “I’m so excited to be standing here, I could almost do cartwheels!”

Aariak said hockey groups in Iqaluit have often held matches late in the evening because of the crowded schedule at the old Arnaitok arena, and Sheutiapik said there has been no time at all for families to get free-skate ice time.

All that will change with the re-opening of the AWG.

“Certainly [hockey] groups will be happy,” Aariak said. “Along with our speed skaters, figure skaters, broomball players and all the rest.”

That $2.5 million repair bill doesn’t include additional upgrades and repairs that Iqaluit City Council approved in 2010.

These include a floor panel system to lay on top of the ice which will enable the arena to serve as a non-ice venue even during ice season.

Materials for that system are on their way to Iqaluit via sealift.

There’s also new insulation that was installed in the spring of 2010 that would allow the AWG to make ice all year if the building’s cooling plant is upgraded.

And the lobby floor needed replacing in the winter of 2010 after cold weather burst a pipe in the ceiling. Insurance paid for that repair work.