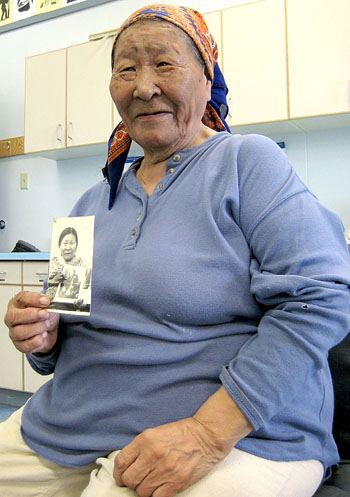 Elder Martha Otokala, the senior participant in Arviat’s Nanisiniq history project, holds a picture of herself holding a photo of her mother in labour that was taken by photographer Richard Harrington — an intimate moment he had no business recording, she says. (PHOTO COURTESY OF NANISINIQ)

An ambitious history project and training program will see the Sivulinuut Elders Society and youth in Arviat collaborate with researchers from the University of British Columbia over the next two years to record the history of Arviat and the Kivalliq region.

The project, called Nanisiniq, involves researching, writing, and filming the history of the area from an Inuit point of view— and participants have already uncovered deeply personal memories of the past.

During a discussion about research, elder Martha Otokala, the senior member among the project participants, brought a photo of herself holding a picture of her mother taken at Ennadia Lake by the renowned photographer, Richard Harrington.

“I told people that Richard Harrington was taking pictures whenever he wanted without asking for permission. In that photo my mother was in labour. It was a very intimate moment that should have remained intimate,” Otokala writes on the project’s website.

“Qablunaat sometimes were very rude to Inuit, as in this instance… Richard Harrington saw that we, little children, were helping our parents and learning how to accomplish complex tasks. However, he wrote in the newspapers that we were treated like little slaves. This was far from the truth!”

Over the next two years, Otokala, another elder and group of five youth will record history, the way they see it: they plan to talk to elders, look over historical photographs and visit archives in Yellowknife and Vancouver.

And, when they’ve finished their research, the results may take the form of a book, a DVD, a television show and a documentary film— or all of these.

The Nanisiniq Arviat history project already has its own website and blogs by its participants at http://nanisiniq.tumblr.com, which project co-ordinator David Ukutak Jr. urges everyone to follow.

Ukutak, like many others in Arviat, wasn’t born in there, but in Whale Cove. He was a baby when he arrived at the settlement, then known as Cape Eskimo Point.

Ukutak said he’s always been curious about history and, more precisely, about how his community came into being.

Passing this knowledge to young people in Arviat is central to the project, he said.

“There’s a lot of Inuit here in Arviat from different places — which is one thing the young people here don’t know, where they come from, where their roots are. To know who you are, to know your roots, your identity, gives you strength, to be proud of who you are,” Ukutak said.

Arviat, population 2,200, was originally home to the Paallirmiut, as well as other coastal and inland Inuit.

But in 1957, the last remaining Ihalmiut, another Caribou Inuit group, were relocated to Arviat by the Royal Canadian Mounted Police.

Since the Nanisiniq project got underway in early June, there have been some surprises during the workshops.

Looking at maps revealed that one participant had no idea where his family was from, and, during a session involving old photos, another recognized her grandparents — the first time she had ever seen a photo of them.

Judging from the blogs on the project’s website, the youth participants have enjoyed the June workshops, which included instruction in filmmaking.

Robert Mukyungni says on his blog that “learning more about Arctic history and being involved with the Nanisiniq is perfect for the people of Arviat.”

Nanisiniq participants have also engaged people of Arviat in their project.

They went on the community radio program, Arviaq Aluk, to talk about what they’re doing, with about 11 members of the team, plus host John Main, crammed into the tiny studio for a call-in show.

For nearly two hours, they responded to calls, which included stories, and questions, such the name Cape Eskimo Point was changed to Arviat and expressions of support for the participants.

Frank Tester, a University of British Columbian social work professor, got funding for the history project from the Social Sciences and Humanities Research Council of Canada.

Tester, who has co-authored two books about northern issues, Tammarniit: Inuit relocation in the Eastern Arctic, 1939-63 and Kiumajut: game management and Inuit rights, 1900-70, said he hopes material from the Arviat project can serve as a basis for social studies texts for Nunavut high school students.