Devices would collect solar energy, give off light 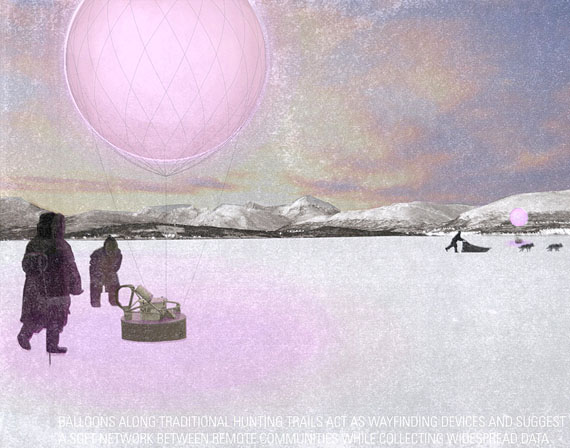 In addition to casting light on the community and serving as “lighthouses”, the balloons contain a device that would measure ice thickness or permafrost. (IMAGE COURTESY OF CLAIRE LUBELL AND VIRGINIA FERNANDEZ)

Two Ontario architecture students have big ideas on how to light up Arctic communities that remain dark through the winter months.

University of Waterloo students Virginia Fernandez and Claire Lubell, both 24, just won an honourable mention in an international architecture competition for their project called Buoyant Light.

What’s more, the balloons over water would be attached to research buoys which collect information on tides, currents and temperature.

The devices would measure ice thickness and send that information to the balloon, which would change colour indicating when the frozen waterway is safe to travel on.

In the students’ design proposal, Lubell and Fernandez used Igloolik as their model, because of the community’s strong cultural and research activity.

“The balloons would be predominantly out over the water or ice,” Lubell said, “and then some closer to town that would act as urban lighting.”

The balloons in water would act as lighthouses and way-finding markers, Lubell said, while the balloons on shore could be clustered around main centres to illuminate public gatherings.

Land balloons could even collect data on changes to the permafrost, she added.

“The idea was to put something worthwhile in the Arctic setting,” Lubell said. “Obviously, electricity is very expensive in those communities, so this is a sustainable concept.”

The introduction of colourful, spherical shapes floating above town was a purposeful aesthetic touch, too, the designers say.

“The cycle of light in the Arctic is something that won’t change, regardless of climate change,” Lubell said. “So this could be used to help Inuit monitor conditions that are less predictable.”

For all their interest in developing technologies for the Arctic, neither student has ever been north of 60.

Fernandez said she and Lubell had a professor that introduced them to the north, which provided a unique way to approach design.

“We were definitely interested and inspired by it,” Fernandez said. “We had to take it upon ourselves to learn about the climate, culture and food.”

More research will be required to ensure the design is cost-efficient and can hold up to Arctic winters.

But first, both Fernandez and Lubell hope to float the idea in the north to see if there’s an interest.

A paper outlining their design has been submitted for publication in a journal and the students plan to seek out research grants to explore the project’s feasibility.