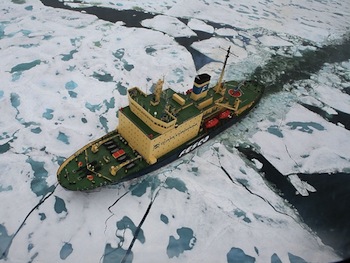 The Kapitain Khlebnikov the first of five cruise ships scheduled to stop in Cambridge Bay, where the community rallies to make sure the passengers’ visits go smoothly. (PHOTO HARVESTED FROM QUARKEXPEDITIONS.COM)

For the fourth year in a row, people in Cambridge Bay are ready to roll out the red carpet for cruise ships that plan to stop in their community.

“We are a machine,” said Vicki Aitaok, the manager of the Cambridge Bay’s visitors centre and a veteran of organizing programs in the community for cruise ship groups.

The icebreaker, the Kapitan Khlebnikov, slated to arrive in Cambridge Bay July 29, is the first of five cruise ships scheduled to visit the community between now and early September.

The other ships include the Bremen, the Hanseatic, the Clipper Adventurer and the Lybov Orlova.

Only the Kapitan Khlebnikov’s Quark Expeditions and Hapag-Lloyd, which operates the Bremen and the Hanseatic, have contacted Aitaok about organizing a program for their passengers in Cambridge Bay.

“If they turn up on the day-of, we couldn’t serve them as well as if thy give us at least a week or more notice,” Aitaok said. “If they were just to turn up, it would not be a proper experience.”

The 112 passengers and more than 50 crew members on the Kapitan Khlebnikov, can look forward to a full program of activities — including walking tours around town to the visitors centre and other points of local interest, such as churches, the old RCMP station, the stone church and the wreck of explorer Roald Amundsen’s ship, which sank near the community in 1930.

For the well-heeled mainly German passengers of the Bremen and the Hanseatic — some of whom pay more than $50,000 for their transit of the Northwest Passage, Aitaok has found German-speaking residents in the community to act as guides.

This year, Aitaok also plans to add a fashion show to the cultural program offered to the cruise ship visitors, who sample tea and bannock while listening to drum-dancers and local musicians.

The direct economic impact from the five cruise ships visits and their 600-plus passengers in Cambridge Bay is likely to exceed $20,000.

Staff from the local branch of the Royal Bank of Canada comes on board the Bremen and Hanseatic to change euros into dollars so their European passengers can spend more money on crafts in Cambridge Bay.

Aitoak put up posters over town about a week before the arrival of the first cruise ship to tell people that it was coming and to allow them time to prepare crafts for sale.

And the community has been tidying up: a July 21 shore clean-up netted more than 200 bags of trash, and earlier this month Cambridge Bay residents stuffed 160 bags during their community clean-up.

Once Aitaok was asked to locate phones and phone cards so that crew members could call home.

Cambridge Bay’s visitors centre is only one in Nunavut which organizes cruise ship programs which in other communities are organized by local private companies.

According to Nunavut Tourism, Nunavut will see six different cruise ships in Nunavut waters this summer.