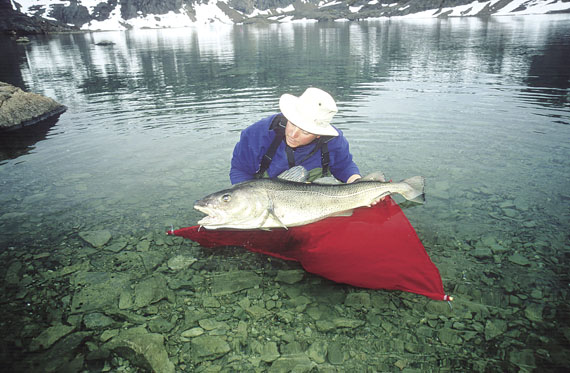 Dalhousie University grad student Dave Hardie with one of Lake Ogac’s giant cod, during a research trip in 2003. (FILE PHOTO)

Fisheries and Oceans Canada is seeking public comments on a proposal to list Nunavut’s unique species of landlocked cod as a species of special concern.

The subspecies of Atlantic cod exists only in three lakes on Baffin Island: Qasigialiminiq Lake and Tariujarusiq Lake near Cumberland Sound, and Ogac Lake near Frobisher Bay.

DFO says the listing is necessary because the cod have a small population, isolated from one another in three lakes that are also sensitive to habitat disruption.

It also says no other species of fish exist in these lakes for cod to feed on.

The only study on Arctic cod populations, dating back to 1962, puts the number of reproductive-aged cod in Ogac Lake at 500, with about 10,000 immature cod.

Fishing may also be a threat, according to a consultation workbook issued by DFO.

If the listing, under Canada’s Species at Risk Act, goes ahead, it could result in restriction of recreational fishing, increased protection for the lakes and more research.

DFO is seeking public comments on the proposal until Feb. 11, 2011.