“Cape Dorset will be a pilot project for Nunavut” 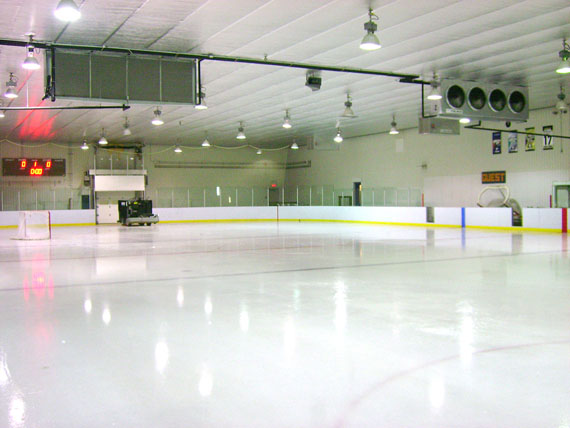 Puvirnituq was the second community in Nunavik to be fitted with eco-ice. The system works by pulling cold air from outside in, where evaporators stabilize the rink’s temperature and humidity. (PHOTO COURTESY OF BEAUDIN LEPROHON) 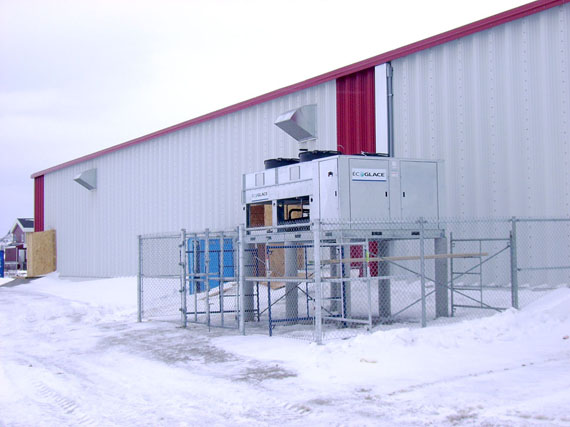 The eco-ice system, shown here in Kangiqsualujjuaq, can extend the hockey season from three to nine months in some northern communities. (PHOTO COURTESY OF BEAUDIN LEPROHON) 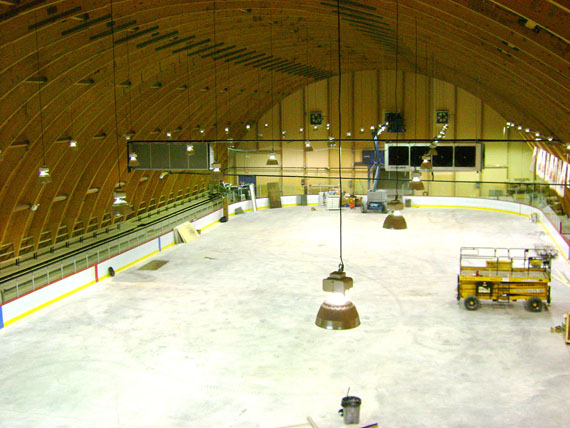 Eco-ice has been installed in arenas in 10 of the 14 communities in Nunavik, including Sikulik arena in Inukjuak. (PHOTO COURTESY OF BEAUDIN LEPROHON)

Hockey players across the North will tell you that, among other things, climate change is interfering with their favourite sport.

That’s because many indoor rinks in the Arctic don’t have ice-making systems and rely on below-zero temperatures to stay open.

Mother Nature hasn’t been much help this winter so far, spreading record-breaking warmth across Nunavik and parts of Nunavut.

But hockey season is getting some help from a new technology slowly making its way across the Arctic.

The hamlet of Cape Dorset is preparing to install an Eco Glace system this spring – eco-ice in English – a first for Nunavut.

The eco-ice system consists of compressors installed outside the arena which pull cold air in.

When the outside temperature goes up, eco-ice switches to a normal refrigeration system. Indoor evaporators stabilize the temperature and the humidity in the arena.

Not only does eco-ice take less energy than other ice-making systems, it will cost a fraction of the price of artificial ice to install and operate.

“We’ve wanted to get artificial ice here for a couple years,” said Cape Dorset mayor Cary Merritt. “But we’d have to put in a concrete slab and piping which are pretty expensive.”

The system will cost the town about $250,000 to install — 50 per cent of it from the Government of Nunavut.

“A lot of other ice-making systems can cost $1 million,” Merritt said. “This is pretty effective for northern arenas. There’s no way we could afford artificial ice.”

“And we don’t have ice right now with this warm winter,” he added.

The best part about the new system, though, is that it should give Cape Dorset’s skaters and hockey leagues eight to nine months of ice time, Merritt said, compared to the three months locals are used to.

“This will have a huge impact for recreation in the community,” he said.

For one, local hockey teams will have a leg up on competitions against Iqaluit teams, who have artificial ice to practice on much of the year.

Installation is set for next spring and Merritt hopes to flip on the “giant freezer” in September 2011.

“Cape Dorset will be a pilot project for Nunavut,” he said. “I think we’ll get some phone calls.”

But eco-ice has already taken root in a region nearby.

A Cape Dorset municipal employee heard about the system after travelling through Nunavik, where 10 out of 14 villages already use the system in their arenas. (Only Kuujjuaq and Salluit have invested in artificial ice.)

Most of the eco-ice systems were installed in 2009, such as in Quaqtaq’s arena.

“We really need the cooling system because the weather’s not cooperating,” he said. “In July, (with eco-ice) it’s still winter in there. It works.”

Unfortunately, one of the arena’s compressors is broken, Aloupa said, so hockey season in Quaqtaq will have to wait until a technician can travel north to repair it.

That’s not a problem common to the technology, although the system’s drain on local power can be.

In 2010, the eco-ice system was installed in Ivujivik, Akulivik and Umiujaq, but Hydro Quebec – Quebec’s power corporation — has asked all three communities not to run the system for now because local generators just don’t have the capacity.

“These systems have too big an impact on power systems in some communities,” said Frédéric Gagné, head of municipal public works at the Kativik Regional Government.

“The main problem is when the system starts, it pulls a lot (of electricity) at the beginning. It’s the same principle as a fridge or freezer, which start and stop to adjust the temperature.”

And that’s caused power outages in some communities.

The KRG and Hydro-Quebec are working to resolve the problem, Gagné said.

Paradis said they have worked at minimizing the amount of energy the system’s compressors draw at start-up.

Although the eco-ice technology normally uses two large compressors, nine out of 10 of the systems in Nunavik were installed with four smaller compressors which start in sequence so there is not a sudden draw of electricity.

But the technology is still offering northern arenas a longer season they couldn’t afford otherwise.

“It’s an economic model for the north, especially compared to artificial ice,” Paradis said. “The energy costs are very low.”

The company doesn’t have figures for eco-ice’s northern operations because they’re all still fairly new.

But once installed in a southern setting, the eco-ice systems cost $12,000 a year to operate, compared to $80,000 for artificial ice.

The southern Quebec-based company developed eco-ice in the 1990s and has installed the system in almost 40 arenas in Canada.