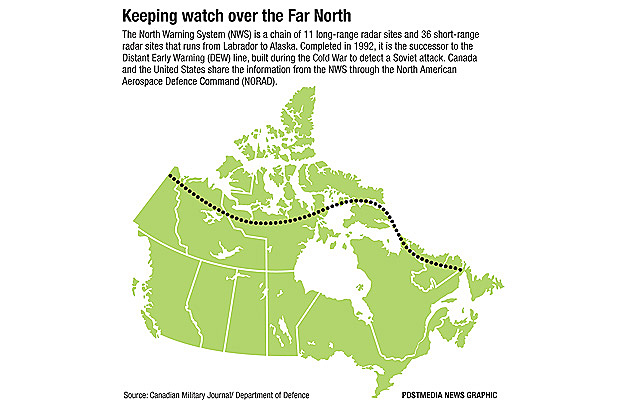 Pan Arctic Inuit Logistics Corp. — made up of seven Inuit birthright companies — and an Edmonton firm called Atco Structure and Logistics, created a joint venture in 1995 that eventually became known as Nasittuq Corp., which won its first contract to maintain the North Warning System in 1995. That contract was renewed in 2001, but expires later this year. (GRAPHIC COURTESY OF POSTMEDIA NEWS)

OTTAWA — The Harper government has put on hold its search for bidders to operate and maintain the North Warning System, a chain of early-warning radars that guards against foreign incursions into Canadian and U.S. airspace in the Far North, Postmedia News has learned.

The North Warning System, a chain of 47 unmanned radars that lines the Arctic coast from Alaska to Labrador, is operated and maintained by Nasittuq Corp. under a 10-year, $624-million contract that ends Sept. 30 this year.

The current contract was awarded in 2001 to Nasittuq, a joint venture between Calgary-based Atco Group and Pan Arctic Inuit Logistics Corp., owned by a coalition of Inuit birthright corporations.

Industry sources say a number of Canadian companies and multinational defence contractors have expressed interest in bidding on the next contract, including Montreal-based SNC-Lavalin and Raytheon, the U.S. defence giant that became embroiled in the controversy over whether Canada should join the United States’ missile-defence shield.

But the Canadian government, which originally hoped to award a new contract this April, has shelved the bidding process as it consults with aboriginal groups, as required under land-claim settlements.

The consultation process is expected to take months or even years.

The delay casts uncertainty over the long-term future of a system that some experts say remains a key component of the joint efforts of Canada and the United States to keep watch over the Arctic, a region that is growing in economic and geopolitical importance as the retreating ice cap opens the door to more shipping traffic and resource development.

“It’s not the only answer to North aerospace awareness, but it’s a completely necessary piece of the puzzle,” said Rob Huebert, an arctic security expert at the University of Calgary. “Nobody likes spending the money you need for a good fence. But good fences make good neighbours.”

The Harper government has vowed to keep a close eye on the growing Arctic ambitions of Russia, which resumed long-range bomber flights in 2007.

The Conservatives have invoked the Russian air threat to justify plans to buy F-35 fighter jets in a sole-sourced contract with Lockheed Martin that could cost as much as $21 billion.

The North Warning System is the successor to the Distant Early Warning (DEW) line, the string of radars built by the United States and Canada in 1957 to track Soviet aircraft and, potentially, nuclear missiles. The radars were upgraded or replaced in 1992 and became known as the North Warning System.

The radars are remotely monitored and controlled at a Canadian Forces Base in North Bay, Ont.

The information collected forms part of the surveillance picture used by the North American Aerospace Defence Command, the Canada-U.S. organization in charge of continental aerospace and maritime surveillance.

For big defence firms, such as Raytheon, the contract represents an opportunity to gain a foothold in the Arctic that could lead to more lucrative work down the line, including upgrades to the radar technology.

Any upgrade contracts would likely be tendered by the Pentagon, since the U.S. air force owns the radar equipment, said one industry source.

A contract win by Raytheon, which is based in Massachusetts but has a manufacturing facility in Waterloo, Ont., that makes radars, could be politically controversial in Canada.

In 2005, the federal government discussed installing Raytheon-designed radars used in the U.S. missile defence shield at a Canadian Forces base in Goose Bay, Labrador.

Some observers argue Canada participates in the missile-defence program anyway, since NORAD shares surveillance data with the U.S. agency that runs the missile shield.

The U.S. pays 60 per cent of the cost of operating the North Warning System, with Canada picking up the rest of the tab.

Nasittuq is responsible for making sure the radars are running and well maintained, a logistically challenging job in the often extreme conditions of the Arctic.

In fall 2009, the federal government put out a “letter of interest” to potential bidders.

But aboriginal land-claim agencies say the letter caught them off guard, suggesting the government underestimated its obligations to consult.

Under the Nunavut land-claims settlement, for example, the government is legally required to consult with the Inuit on any contracts tendered in the settlement area.

A spokesman for the Inuvialuit Regional Corp., which manages the settlement agreement for the Inuit in Canada’s Western Arctic, said it would prefer that Nasittuq be re-awarded the contract. Nasittuq will be vying to keep its job.

“Our experience is that companies coming into the region often don’t make the effort to work with local firms. They have their own suppliers and they come in and do what they normally do,” said Gerry Roy, legal counsel for the Inuvialuit Regional Corp.

The Public Works department, which is managing the bidding process, said the government will ensure the North Warning System remains operational.

It’s expected Nasittuq’s contract will be extended while aboriginal consultations are underway. But companies such as Raytheon hope that doesn’t become an excuse to shut out outside bidders.

The Canadian Defence Department referred questions to NORAD, which said it needed more time to respond.