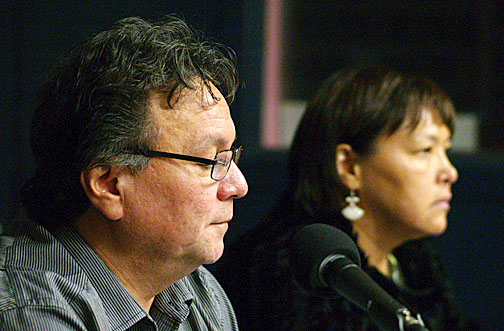 Peter Taptuna, Nunavut’s economic development minister, and Okalik Eegeesiak, president of the Qikiqtani Inuit Association, speak to a news conference announcing the launch of a public engagement process for Nunavut’s anti-poverty strategy. The strategy is expected within a year. (PHOTO BY CHRIS WINDEYER)

The Government of Nunavut and Nunavut Tunngavik Inc. announced Oct. 18 the launch of a massive, Nunavut-wide “public engagement process” they hope will culminate in the creation of the territory’s first anti-poverty strategy.

The process will include government, Inuit organizations, business groups, municipalities, the non-profit sector and Nunavummiut.

“If we are to solve the poverty problem in Nunavut, each one of us must play a part in the solution,” said Peter Taptuna, Nunavut’s economic development minister, who’s responsible for the GN’s anti-poverty secretariat.

“This initiative will ensure than everyone in Nunavut has an opportunity to play a role in helping define poverty, to reduce poverty and to prevent poverty.”

Community sessions are slated to begin this November that will gather information on poverty and possible solutions for the creation of a report, which will feed into a series of roundtables to be held in Cambridge Bay, Iqaluit, Rankin Inlet and Pond Inlet from March to May, 2011.

In the fall of 2011, the GN will convene a two-day poverty summit in Iqaluit which will develop a poverty reduction action plan.

Taptuna said the plan will be based on a consensus of those involved in the summit.

Okalik Eegeesiak, the president of the Qikiqtani Inuit Association, who spoke for NTI at the news conference in Iqaluit Oct. 18, said the creation of an effective anti-poverty strategy requires input from every Nunavut community and a wide cross-section of Nunavut society.

Taptuna said despite a host of government programs, including income support, poverty in Nunavut is still severe and widespread. The action plan will “tackle (poverty) right from the core.”

While poverty hasn’t always been a topic easily discussed in public, Okalik she hears complaints regularly from beneficiaries who say they can’t get by on minimum wage or income support or who are embarrassed to ask for country food from hunters.

Eegeesiak and Taptuna were also joined by members of the non-profit and business sectors, who were enthusiastic about the chance for input on an anti-poverty strategy.

Rhoda Palluq, a board member with Iqaluit’s Piviniit Society, which runs the city’s thrift store, said possible solutions should include improvements to education and the creation of a market for country foods.

Chris West, president of the Baffin Regional Chamber of Commerce, said the process will also have to distinguish people those who are able to work and those, like elders, who can’t.

“I think the main thing is to identify where the poverty is, and what poverty is and then admitting we have a problem, and I think we’ve said that,” he said.