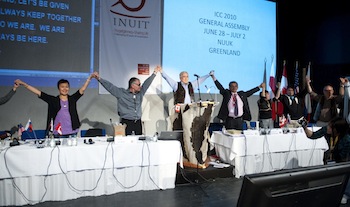 Aqqaluk Lynge invited everyone in the assembly to hold hands.“We stand together now…let’s take our hands and be given strength… we are Inuit and we will always be there.” (PHOTO BY LEIFF JOSEFSEN, SERMITSIAQ) 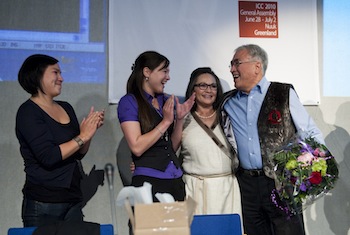 As Aqqaluk Lynge, the newly-acclaimed president of the Inuit finished speaking, he thanked his family, who joined him on stage. (PHOTO BY LEIFF JOSEFSEN, SERMITSIAQ)

The 60-plus delegates attending the Inuit Circumpolar Council general assembly in Nuuk this week gave “unanimous consent” July 1 to the acclamation of Aqqaluk Lynge as their new chairperson.

Standing behind a sealskin podium, decorated with a tiny Canadian flag, Duane Smith, ICC-Canada’s president, asked all delegates to say “da” — which means “yes” for the Russian-speaking Chukotkans — if they agreed with Lynge’s acclamation to the four-year position.

The assembly room at Nuuk’s Katuaq cultural centre resounded with “da’s,” and then Lynge rose to shake hands with Smith.

Lynge, 62, has led the ICC in the past. In 1995, when the ICC met in Nome, Alaska for its general assembly, Greenland was poised to take over the ICC leadership, but Rosemarie Kuptana from Canada grabbed the presidency from Lynge.

But when Kuptana resigned less than two years later, Lynge took over. He remained as ICC president until the end of the Kuujjuaq ICC general assembly in 2002.

At the ICC general assembly in Barrow, Alaska, in July 2006, Lynge was re-appointed president of ICC-Greenland and also as ICC’s vice-chair.

According to an ICC biography, Lynge started his professional career as a social worker after graduating from the National Danish School of Social Work in 1976.

For several years, he was a radio broadcaster, until he entered Greenland politics.

Lynge, one of the founders of the Inuit Ataqatigiit Party, was first elected to the Greenland parliament in 1983 and has served as a member of parliament and as a minister of various portfolios.

Lynge is also an author, having written books of poetry and essays, and has also contributed to several works and anthologies written in the English, Greenlandic, French and Nordic languages.

Lynge was instrumental in bringing Russian Inuit into the ICC family when, as early as 1985, he travelled to Moscow in the former Soviet Union to lobby for their inclusion into ICC.

Lynge is a member of the United Nations Forum on Indigenous Issues.

He lives in Nuuk, Greenland with his Erna and their two children.

Speaking to the ICC meeting on June 1, Lynge vowed to help Inuit realize their destiny.

“Our destiny is in our hands,” he said, outlining his vision of a future with healthy and happy children, clean water, respected and involved elders, “a modest and sustainable economy,” and a “strong social fabric.”

Lynge called on Inuit to ensure that companies who want to develop Arctic resources keep the environment clean, train local workers and respect Inuit rights. He urged everyone to make sure their political leaders develop projects that are “good for Inuit.”

As Lynge finished speaking, he thanked his family, who joined him on stage, and then invited everyone in the assembly to hold hands.

“We stand together now…let’s take our hands and be given strength… we are Inuit and we will always be there.”

Before the assembly ended, Mary Simon, president of Inuit Tapiriit Kanatami, received the Bill Edmunds award, the highest award ICC hands out during its general assemblies, in recognition of her work in advancing the rights and interests of Inuit internationally.

As one of its last orders of business, delegates at the ICC assembly also passed the Nuuk Declaration, which outlines its objectives for the next four years.

The Nuuk Declaration says ICC will “plan and facilitate an Inuit leaders’ summit on resource development” to develop a common Inuit position on how impact assessments should be undertaken in the Arctic.

ICC will also promote the Inuit declaration on Sovereignty in the Arctic, protect and promote Inuit rights and way of life internationally, advance Inuit health issues, and work towards eliminating of contaminants coming to the Arctic.

ICC also calls on Arctic states to restate their commitment to the Arctic Council as the central forum for international Arctic decision-making, and to include Inuit in all other organizations of interest to Inuit in the “same direct and meaningful manner as at the Arctic Council.”

Read the Nuuk Declaration, posted below: