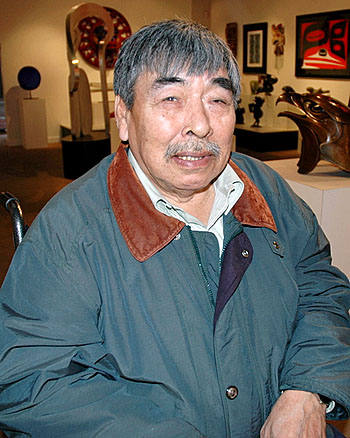 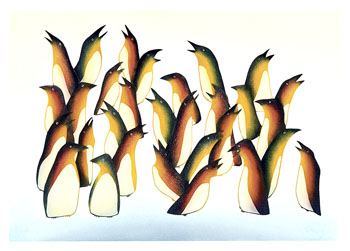 “Arctic Murres,” by Kananginak Pootoogook, an etching and aquatint made in 2007. (IMAGE COURTESY OF BURDICKGALLERY.COM)

Inuit art has lost a legend.

One of Cape Dorset’s best-known sculptors and graphic artists is gone.

Kananginak Pootoogook, a figure in the growth of Inuit art for five decades, died in an Ottawa hospital Nov. 23 at the age of 75.

Dubbed by southerners as the “Audubon of the North,”a reference to the famed American wildlife artist, John James Audobon, Pootoogook was known for his drawings of Arctic wildlife, especially birds.

Many say Pootoogook had a photographic memory, which he used to recall images of a youth spent living on the land on southern Baffin Island in the 1940s and 1950s.

“You could tell how much he understood animal behaviour,” said Ingo Hessel, a family friend and Inuit art curator who put together a solo exhibition of Pootoogook’s work last summer at Toronto’s Museum of Inuit Art.

“It wasn’t simply the details, but the spirit and intelligence of the animals in his drawings. You feel like the subjects are looking you, as much as you’re looking at them.”

His work is beautiful, but it also shows wit and sarcasm, Hessel said, while portraying the changes that have taken place in the Arctic over Pootoogook’s life.

Pootoogook was born in 1935 at Ikirasak, a camp on southern Baffin Island, and was raised as a hunter and trapper until he relocated to nearby Cape Dorset in the late 1950s.
There he met James Houston, with whom he helped establish the Arctic’s first printmaking studio.

Before his death, Pootoogook was the last of the original printmakers from the West Baffin Eskimo Co-op, home of the renowned Kinngait graphic arts studio, which celebrated its 50th anniversary this past year.

Pootoogook’s work showed the changes that occurred within Inuit life across the Arctic, as evidenced in his early pieces, “The Photographer,” and “The Police Officer.”
“As much as he knew of his parents’ ways, he knew was life was already so different from theirs,” Hessel said. “He really understood that his generation was a transitional one.”
In those portrayals of Arctic life, Pootoogook was also a historian, says friend and colleague Terry Ryan.

“He was always careful to do a drawing and tell you exactly what he was trying to portray,” said Ryan, a former veteran manager of the West Baffin Eskimo Co-op. “I think he was keen to leave behind a message in his work.”

And whether the message was serious or funny, Pootoogook took great pleasure in his creations.

One print of a caribou displayed at a Toronto exhibit this past summer shows the animal looking straight ahead with a human-like expression.

That moment Pootoogook describes as the “warm feeling you get starting from your forehead and up over your scalp.”

Pootoogook fought lung cancer for many months, finally moving to Ottawa for hospital care this fall.

But he continued to draw and write his memoirs during the months leading up his death.

Memorial services are planned for the late artist in Cape Dorset and Toronto early next month.