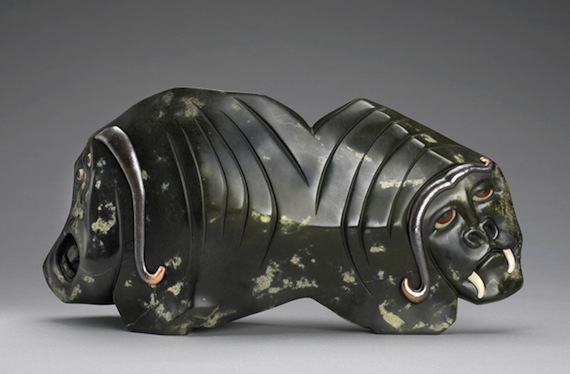 The Sanaugavut exhibition includes this work by Michael Massie, Just Agree to Disagree, recently purchased by the National Gallery of Canada. (PHOTO/NATIONAL GALLERY OF CANADA)

A big collection of Inuit art masterpieces from the four Inuit regions of northern Canada are now on display at the National Museum Institute in New Delhi, India.

The exhibition, which flows from a memorandum of understanding that Prime Minister Stephen Harper signed with his Indian counterpart, Manmohan Singh, at last June’s G-8 summit, is the first major show of Inuit art in Asia.

Called Sanaugavut: Inuit Art from the Canadian Arctic, the show comprises 46 carvings, seven prints, three drawings, a tapestry and two videos, all selected from the National Gallery of Canada’s collections.

“Inuit artists are recognized throughout the world for their remarkable creativity. We are all the more pleased to highlight Inuit culture and achievements as this exhibition coincides with the Inuit Tapiriit Kanatami’s campaign, 2010 Year of the Inuit,” Marc Mayer, the national gallery’s director, said in a press release.