Nice design, but no cemetery. This computer-generated photo shows the design of Iqaluit’s now defunct new cemetery, where the Road to Nowhere crosses the Apex Creek. Overlaid on the photo is a graphic depiction of paths, cross and grave markers of natural local stone with metal plaques, based on consultant Catherine Berris’s design option four, which received the most community support last year. (PHOTO PROVIDED BY CITY OF IQALUIT) 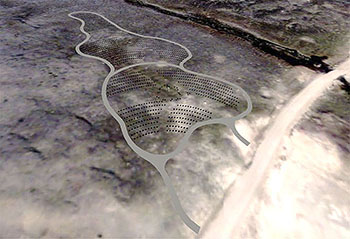 This aerial photo shows the location for Iqaluit’s new cemetery that Iqaluit City Council rejected July 13, near where the Road to Nowhere crosses the Apex Creek. Overlaid on the photo is a graphic outline of the proposed cemetery, based on consultant Catherine Berris’s design option four, which received the most community support in 2009. (PHOTO PROVIDED BY CITY OF IQALUIT)

Iqaluit City Council voted unanimously July 13 to stop work on a proposed new cemetery on the Road to Nowhere after council learned there are too many rocks and boulders in the area to accommodate even half the number of burial plots they had originally planned.

In an emergency city council meeting July 13, city planner Michele Bertol asked council to approve spending another $100,000 to accommodate the additional time, labour and equipment that would be necessary to turn the rocky ground of the areas into a terraced cemetery.

“It’s full of rocks,” she said. “It’s basically a lot of rocks with a bit of dirt in between, instead of a lot of dirt with a few rocks here and there.”

In 2008, council had approved the Road to Nowhere site, after rejecting another proposed location in the West 40 area.

Her plan would have used locally-gathered rock to make gravemarkers and benches, and to delineate pathways. After she made a presentation to them at a council meeting held in August of 2009, council voted in favour of Berris’s design.

It’s not clear if it was Berris’s firm, or an earlier consultant, who examined the site to find out if it was suitable.

No councillors referred to any contractor by name at the July 13 meeting, and chief administrative officer John Hussey did not return phone calls.

But councillors did want Bertol to ask “the contractor” to come to council and explain how its report could turn out wrong.

The original plan for the cemetery would have created 400 burial plots each in three phases of development, which would meet the city’s need for cemetery space for the next 30 years.

But the ground is so rocky, Bertol estimated that even with the additional $100,000 the area wouldn’t accommodate more than 140 plots.

The land was largely representative of terrain around Iqaluit and the city would probably face similar issues no matter where it tries to create a new cemetery, Bertol said.

“The reality is that in Iqaluit there is no such thing as a perfect site,” she said.

Several city councillors had inspected the area earlier in the day, and said they were baffled that the rocky place had been considered for a cemetery at all.

Coun. Jimmy Kilabuk, who had voted in favour of the site when he was on the previous council, criticized the council’s over-reliance on reports and documents instead of the councillors conducting their own inspections.

“When we went there today I could see with my own eyes that the area was not suitable,” he said. “I was wrong about approving the site without seeing it without our own eyes.”

“How shall my relatives and friends who will be put to the ground eventually, including myself, how will we be put?” asked Coun. Natsiq Kango.

Several councillors asked Bertol whether it was possible to build the cemetery in a nearby sandpit.

Bertol later told Nunatsiaq News that the sandpits near the end of the Road to Nowhere are out of sand, having contributed to Iqaluit’s gravel roads and construction projects for decades.

What is left is naked clay — dense, water-absorptive, and nearly as hard as concrete once it’s frozen.

“You cannot dig into the clay. You just can’t,” she said.

To turn one of the old sandpits into a cemetery would require moving tonnes of sand from another location to create a layer to accommodate the burial plots, far more expensive than continuing on the proposed — and now abandoned — site.

“You would be hard pressed to find one bucket of sand,” she said. “The sand has to come from somewhere else.”

On top of that, the work would also involve creating drainage systems out of the pit, causing a further complication and cost.

And once finished, the sand-pit cemetery would still look like a sand pit, ugly and barren, in contrast to the planned site located in the more scenic tundra.

It’s not clear how much money the city has spent on the aborted project, but Bertol estimated that it could exceed $100,000 once contractors’ invoices are tallied.

In making her presentation to the council on July 13, Bertol said that if the additional spending isn’t approved, the city would have to start from scratch in choosing new potential sites, conducting public consultations, and then designing the cemetery.

Bertol explained that the contractor had inspected the site by digging three test holes and found that the rocks in the area are mainly on the surface. This turned out not to be the case, once construction of the cemetery began.

With labourers hired and equipment in place but no place to dig, the city will decide its next move at the next regular council meeting on July 20.

With files from Jim Bell.