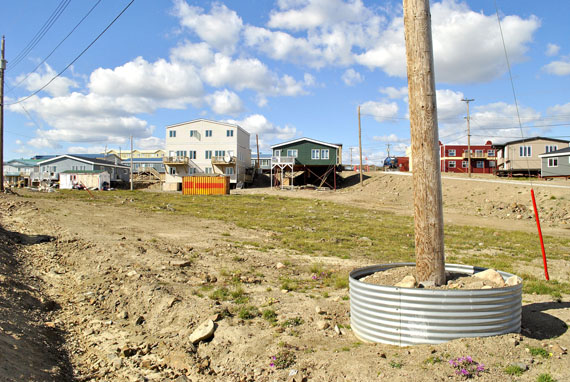 Some homeowners in the Plateau subdivision claim that a commercial development on this lot would reduce their property values, so Iqaluit City Council gave in to their demands at a July 20 council meeting. (PHOTO BY JIM BELL)

More than a dozen residents of Iqaluit’s plateau subdivision on July 20 successfully challenged an attempt to re-zone a lot in their neighbourhood from institutional to mixed commercial and residential use during the most crowded meeting that Iqaluit City Council has seen in years.

The plot in question had been zoned for institutional use when the Plateau subdivision was first developed, but then sat vacant for more than five years.

As a result, some new homeowners said they bought their homes believing the vacant lot was going remain empty, and said they were surprised and dismayed to learn that a building was going up there.

“When I bought my home, I thought it was going to be green space,” Virginia Lloyd said at the meeting.

Another resident said he had known the lot was eventually to be occupied with a building, but said he never expected to see something like the proposed building built there.

The proposal for the re-zoned lot called for a two-storey building with three commercial storefronts on the ground floor, along with 16 high-density residential units: either one-bedroom or bachelor apartments.

This resident was not alone in complaining that the two-storey structure would block views of the rest of the city and Frobisher Bay beyond.

The plan also called for the building to have 20 outdoor parking spaces, sparking concerns about traffic, noise and pollution from idling vehicles.

Property values were another recurring theme among the residents’ presentations to city council and the written representations submitted by residents who could not attend the meeting.

“Traffic due to commercial activities will highly increase,” according to a letter signed by several residents.

“Safety of children will be compromised. Commercial retail facilities and loading zone for heavy vehicles will affect the sector’s safety and traffic fluency. This beautiful subdivision is known for its nice peaceful environment. This enormous building including three or more commercials is not suitable for this middle lot and will compromise the peaceful residential environment in this peaceful sector.”

With the entire council present, Romeyn Stevenson was the only councillor to vote to in favour of re-zoning the lot to commercial-residential, a stance he acknowledged would be unpopular among many who attended council.

Stevenson applauded the Plateau residents who attended the public hearing for getting what they wanted— which is what public hearings are for, he said.

With the lot ready for piped water, sewage and electrical services but vacant for so long, the city at first attempted to re-zone it into four single-family dwellings.

But that plan changed with a proposal from developer Nova Builders, which applied for the mixed residential-commercial use.

Nova Builders owner Mike Mrdjenovich said the three commercial spaces would have held a public laudromat, a private laundromat for Nova’s hotels in Iqaluit and a storage space.

He estimated the decision cost the city some $100,000 in lost tax revenues.