“At the end of the day, there will be no money” 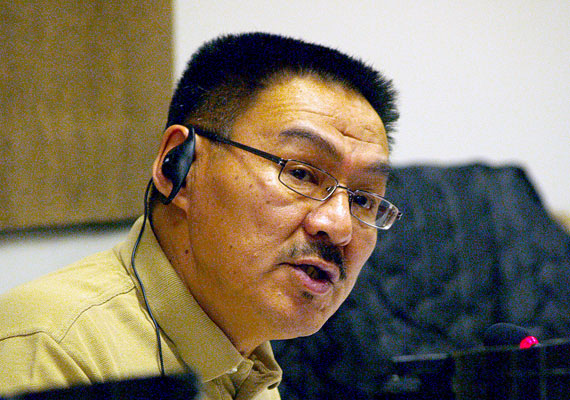 New Iqaluit city councillor Joanasie Akumalik, elected during a by-election this past December, speaks during a council meeting Jan. 11. Akumalik worries that the Nunavut government’s proposed anti-poverty strategy is doomed from the start because the GN is broke. (PHOTO BY CHRIS WINDEYER)

Iqaluit City Council is skeptical about a push by the Government of Nunavut and Nunavut Tunngavik Inc. to tackle poverty in the territory.

Joanasie Akumalik, Iqaluit’s newest city councillor, questioned the value of the GN’s “public engagement process” that’s meant to craft an anti-poverty strategy for the territory when the government is broke.

“To me, it sounds like a failure for Inuit,” Akumalik told Ed McKenna, head of the GN’s anti-poverty secretariat.

“At the end of the day, there will be no money” for the government to implement fixes for Nunavut’s rampant poverty problem, Akumalik said.

McKenna went before council Jan. 11 in an effort to enlist council in the “community dialogue” on poverty, that will culminate in a “poverty summit” in Iqaluit this coming November.

The GN hopes that summit generates specific policies the government can put into action.

And if those policies cost little or no money, all the better, McKenna said.

“It should be possible to identify options that have an impact on poverty that we can afford,” he said.

But the final decisions will be up to elected politicians, based on what they hear from Nunavummiut during consultations, he added.

But it remains to be seen how much Nunavut can actually do to tackle poverty, given that the territory’s finances are still reeling in the wake of $110-million in cost overruns at the Nunavut Housing Corporation.

Throw in a proposed power rate hike of nearly 20 per cent, most of which the GN will have to pay for, and the fact that two of the GN’s big public sector unions, the teachers and Nunavut Employees Union, will be seeking new contracts and there’s even less money available for a poverty plan.

Poverty is generally a systemic problem that can’t be solved simply by throwing money at it.

Add it all up, and the GN would appear to have little room to maneuver.

“We know this is a major problem that is going to take 10, 20 years or more to make an impact on,” McKenna said.

But that’s why the GN is taking the question to Nunavummiut, starting with a series of regional roundtable meetings in May, he said.

“Let’s just ask this question openly and really hear what people have to say,” McKenna said. “There’s no issues that are off the table.”

Coun. Mary Akpalialuk said there’s one area that soaks up millions of dollars every year from Nunavummiut that could otherwise help pay for the necessities of life: vice.

“If you want to reduce poverty, why don’t you reduce drugs, alcohol and gambling,” she said.

And Coun. Mary Wilman wondered why the GN is seemingly starting from scratch, when there is already ample research on both causes of and solutions to poverty.

“Some people already know what should be done,” she said.