“Sometimes we have to say no to developers” 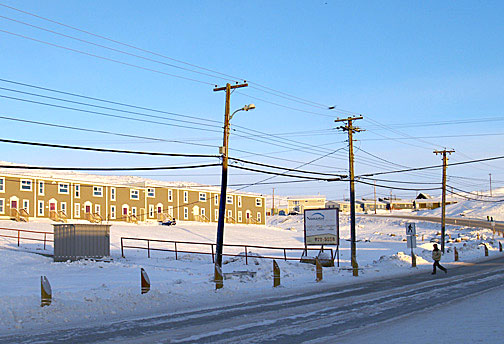 Part of Creekside Village is seen Jan. 27. Iqaluit city council nixed a proposed zoning bylaw amendment that could have seen two aparment buildings go up on land in front of existing development. (PHOTO BY CHRIS WINDEYER)

Nunastar Properties pitched the construction of four new three-storey buildings behind and in front of Creekside Village, commonly known as “white rowhousing” that would have consisted of single-bedroom apartments.

In a unanimous vote, councillors voted to deny first reading of a zoning bylaw amendment that would have got the development process started.

“There isn’t a single apartment available for rent [right now],” she said.

But some councillors didn’t like that the proposal called for rezoning of a stretch of land along Queen Elizabeth Way, across the street from Arctic Ventures.

The current rules classify that space as part of a central business district, meaning any new development would have to include commercial space.

The Nunastar proposal would contain no commercial space and sought to have land rezoned as high-density residential.

Councillors Mat Knickelbein and Romeyn Stevenson said the city should retain the current zoning rules, which were laid out in Iqaluit’s general land use plan.

“I think we should be encouraging people to be building offices and commercial space in that area,” Stevenson said. “We need more commercial space here for our downtown to have a vibrancy to it.”

Knickelbein said he supported a second part of the proposal: two buildings that would go up between Creekside Village and the Astro Hill complex.

Coun. Mary Wilman said the proposed buildings were too big and would block views from the existing housing at White Row. The city should be promoting single-family homes, not high-density apartments, she said.

“I don’t think [apartment living] is very healthy as a lifestyle,” she said. “Sometimes we have to say no to developers.”

Coun. Joanasie Akumalik said the project should include two- and three-bedroom apartments to make room for families.

But Bertol said the city doesn’t have the authority to dictate what kind of apartments would go inside the buildings.

She said council could propose amendments to the proposal later. But in the end, council voted unanimously against the amendment.

Nunastar’s Don Sinclair-Chenier said Jan. 27 his company is working with the city and will take another crack at developing the site, but wouldn’t give details.

“We’re not giving up but we have no further comment at this time,” he said.

The Jan. 25 meeting was Bertol’s last as Iqaluit director of planning and lands.

She was fired the next morning. City officials said her termination had nothing to do with the previous night’s council meeting.