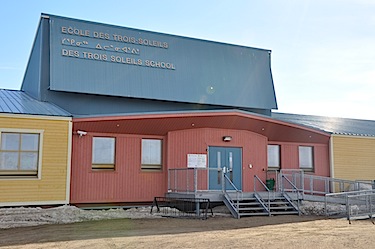 In the ten years since École des Trois-Soleils opened, Iqaluit’s French-language school has more than doubled its student population and become the backbone of the local francophone community. (PHOTO BY SARAH ROGERS) 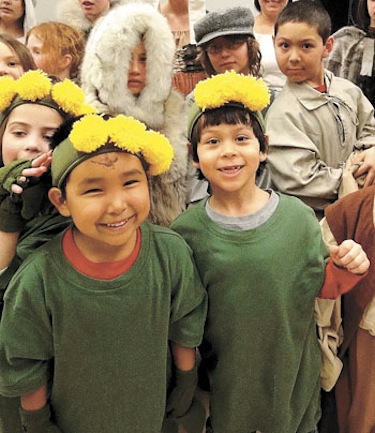 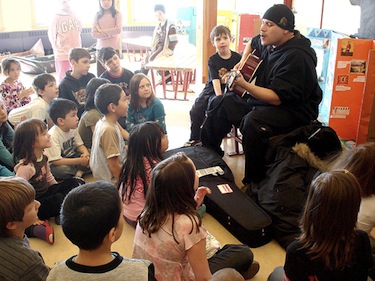 The Archer-Roussel family never thought they’d get the chance to learn about their Acadian roots thousands of kilometres away from home.

The Iqaluit couple, originally from New Brunswick, enrolled their daughter and son in the territory’s only French-language school, École des Trois-Soleils.

Esmé, now in grade 7 and Sébastien, a Grade 2 student, are both perfectly bilingual English-French speakers.

Although Archer speaks fluent French, it’s her partner Claude Roussel who comes from an Acadian background.

And while Roussel’s parents and extended family in New Brunswick are francophone, they spoke to Roussel and educated him in English only.

But since the couple’s two children started using French at home, Roussel has picked up a language he never had the chance to learn.

The experience has also forced Archer to brush up on her own French.

“It’s been a cultural reclamation for Claude, to be able to communicate with his relatives,” Archer said. “For the kids, they’ve really identified with their Acadian roots.”

That’s just one example of how École des Trois-Soleils [Three Suns school, in English] has changed the face of Iqaluit since it first opened its doors in 2001 to a tiny population of 35 students.

Ten years later, the school has more than doubled its student population, while becoming a foundation for Iqaluit’s French-speaking community, a group of roughly 800.

The school population now numbers 72 students from kindergarten to Grade 8, while a handful of secondary students do French-language studies at Inuksuk high school.

Today, about 40 per cent of Trois-Soleils students have an Inuk parent.

The rules about who can attend the school have relaxed since 2001 – rather than have one parent who attended school in French, students with a grandparent who was educated in French may attend Trois-Soleils.

Despite its growth, the small school faces challenges, from not having its own gymnasium, science laboratory or the capacity to educate its secondary students on-site.

But staff at Trois-Soleils pride themselves on what the school has achieved in its short life.

The school has built a reputation for its strong arts and culture curriculum – Trois-Soleils welcomes artists to lead week-long workshops for its students.

Many of those artists and artisans are local, but others are Québécois or French-Canadian, because it can be difficult to find local resources in French, says Carolyn Mallory, the president of Nunavut’s francophone school board.

Recently, students participated in a theatre workshop, where they studied and performed a piece of theatre.

“It’s really to give students the idea that it’s not just in the school that French is spoken,” Mallory said. “We want to show them that it’s spoken all over.”

Because many of the school’s students speak English or Inuktitut at home, Trois-Soleils offers what they call a francization (immersion) program in the late summer before the new school year begins.

Both services help brings students language skills up to speed before they enter the classroom, Mallory said.

While a little less than two per cent of Nunavut’s population identifies itself has using French as a first language, francophones live throughout the territory.

“It’s hard to say but maybe we’d create an arm in [another community],” Mallory said. “Right now, we’re not equipped to service them, but it’s something we’d like to do.”

The francophone school board – la Commission scolaire francophone du Nunavut — is unique in that is manages only one school. It has five elected commissioners, each with a three-year mandate, who are now into their third mandate since the creation of the institution.

And Mallory said it’s made a difference.

“Before the school was here, [French] classes were held in Nakasuk school but our visibility as a community was almost non-existent,” Mallory said. “Today, our visibility has really grown.

“It means that francophones can stay in the community longer, it gives them more [linguistic] stability.”

Mallory says it’s tricky being a double minority, in a territory where French is considered an official language, but English and Inuktitut are clearly more dominant languages.

But she acknowledges that the Inuit language must also be defended if it is to thrive. In that sense, Nunavut’s French and Inuktitut speakers have the common objective to protect their language and culture.

“Inuit also lack rights in education,” she said. “We’re an example for them and we try to encourage them in their efforts and share how to move forward.”

Mallory said it can appear as though Trois-Soleils receives more funding to operate, but she says the government of Nunavut provides the same money to all the territory’s school, regardless of language.

But because of its minority language status on a national level, Trois-Soleils also receives money through Heritage Canada.

Esmé and Sebastian’s mother says that money allows the school to “raise the bar all around.”

But, Archer says she wishes the Inuktitut language also got same per capita funding.

Trois-Soleils has tried to offer Inuktitut as part of its regular curriculum, but hasn’t been successful funding an instructor.

For now, the school offers optional Inuktutit-language courses two nights a week and on Saturdays.