“The message was loud and clear” 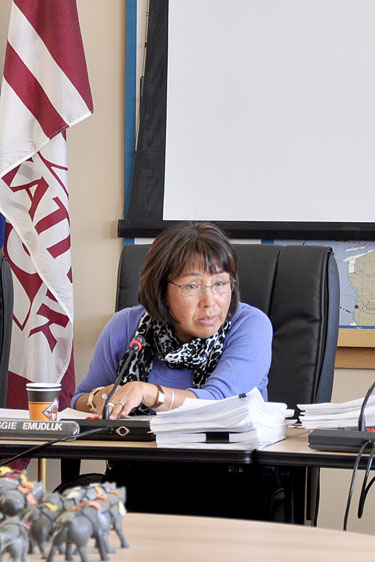 KUUJJUAQ — If Nunavik leaders were let down by the fall of the Nunavik Regional Government this past week, few argue the result does not represent the will of Nunavimmiut.

“I’m disappointed, but we have to accept this result,” said Maggie Emudluk, the chair of the Kativik Regional Government. “The message was loud and clear.”

She’s disappointed because a vote in favour of amalgamating regional services — as the NRG proposed to do — would have given Nunavik a leg up, she said.

“I’ve been a supporter of this project from the beginning and I still believe in the creation of a single forum to oversee all these [services],” Emudluk said. “It would give us a better vision and a better political front against both governments [federal and provincial].”

But a “no” vote doesn’t change the KRG’s priorities, she added, to improve the living conditions and essential services for all Nunavik residents.

“I just hope the Inuit leaders responsible for [negotiations] will continue to push,” she said. “Maybe in 10 or 15 years, things will be different.”

The head of another organization that would have been affected by the NRG says any negotiations must happen differently next time.

Kativik School Board president Alicie Nalukturuk said Nunavimmiut should work towards autonomy based on Inuit language, culture and values.

“In any future negotiations, we should strive to attain the powers of the NRG first — and then merge, if it’s necessary,” she told Nunatsiaq News.

The results of the April 27 referendum reflect the same concerns the school expressed almost a decade ago, Nalukturuk said, when the KSB filed a motion against Makivik Corp. in Quebec Superior Court to freeze negotiations.

The KSB said that document should not form the basis of negotiations because it was not signed by all of its commissioners.

In 2001, the KSB slapped Makivik, the KRG, the Nunavik Regional Board of Health and Social Services and the Kativik Regional Development Council with a declaration that sought a temporary stop as well as a permanent injunction on self-government negotiations.

The KSB’s move angered officials at the regional organizations named in the declaration who felt the school board’s commissioners should stick to education and stay out of politics.

That legal application was rejected in 2004, but Nalukturuk said that same sentiment remains, particularly in her home base of Inukjuak.

That’s where 84 per cent of ballots rejected the NRG agreement this week — the highest percentage of any Nunavik community.

But in the shadow of a failed project, many see the referendum results as a chance to mobilize the population and get it right for next time.

“[This referendum] just shows that Nunavimmiut were expecting more from the process,” said Johnny Adams, a former Nunavik Commission chairman and longtime KRG chairman. “It’s clear that the electorate was expecting more details about the powers to be negotiated.”

Now, Adams said Nunavik has to sit back and see if both levels of governments are willing to go through this process again, “because they’re the ones funding it.”

The NRG referendum alone is estimated to have cost $400,000.

“If the governments are open — great,” Adams said. “And if not, we’ll have to wait some time before we do this again.”