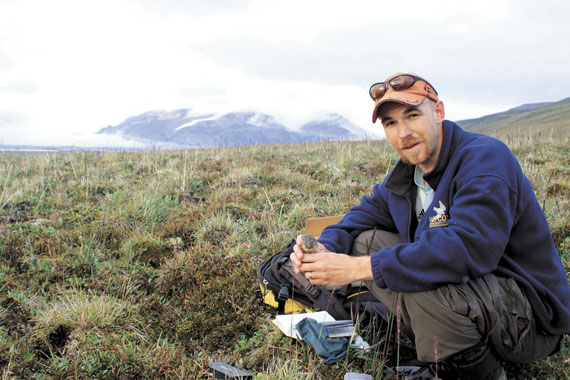 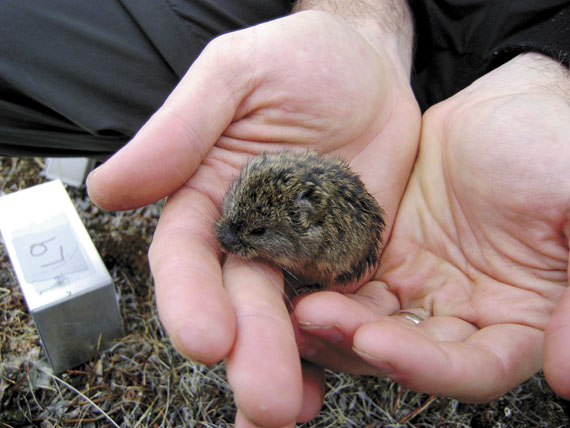 They may be small and cute but in the Arctic food web, lemmings are a mighty keystone species whose future depends on snow — and plenty of it.

If some climate models pan out, suggesting that areas of Nunavut will get more snow thanks to global warming, the ubiquitous hamster-like creature will flourish.

But shorter winters, and perhaps more rain — which is what some climatologists predict — could spell disaster for lemmings, the furry snack of choice for many northern predators.

Models reveal only possible outcomes, of course. No one knows for sure how much snow will fall in the coming decades, and where.

For now, lemming populations here are healthy and thriving, says Frederic Bilodeau, a PhD candidate at the Université Laval, who presented his Bylot Island research at last month’s ArcticNet conference in Ottawa.

“I’m not really concerned about the lemming population in North America,” says Bilodeau. “This is definitely going to be a problem in time. Of course, the entire ecosystem will be in trouble if the lemming numbers go down. But we’re not seeing that right away.”

Bilodeau says the fate of lemmings elsewhere is not so secure.

Studies from Scandinavia show that warmer temperatures have encouraged the march northward of new predators, causing a decline in lemming numbers there.

In Russia, it’s the influx of voles that are outcompeting lemmings for food.

Aside from the increasing appearance of the red fox in Nunavut, new predators and competitors have not become a problem in the eastern Arctic. What matters most here seems to be amount and quality of snow.

The tiny mammals live under the snow nine months of the year. They make tunnels in the pockets of air between ground and snow, relying on a thick cover to hide from predators, have babies, get access to vegetation for food and shelter themselves from cold.

Annually in spring, from 2007 to 2010, Bilodeau visited Bylot Island in Sirmilik National Park, to study the impact of snow on brown and collared lemmings, the two species that inhabit Nunavut.

He chose two areas on the island to examine — a 7.3-hectare study zone surrounded by snow fencing and a control area of nearly 11 hectares mapped off in a grid but devoid of fencing.

The study zone ended up with more snow because it accumulates around the fencing. Because lemmings like deep snow, more of the critters built their nests there. Bilodeau also discovered lemmings prefer snow that is not too densely packed.

Lemming populations naturally fluctuate, peaking in numbers every three to four years and crashing in between. Though they have been studied for 100 years, it’s still unclear to scientists exactly what causes that cycle.

This experiment suggests to Bilodeau that a generous, loosely packed snow cover bolsters the population and the amplitude of those population peaks.

This is crucial information because lemmings are a keystone species, meaning any change in their health would have a wide ranging impact on the entire Arctic ecosystem.

Small and mid-sized predators such as fox, ermine, snowy owls and hawks rely on lemmings as a main food source.

Annual fluctuations in predator populations are directly linked to the abundance or scarcity of lemmings.

Some avian predators actually refrain from laying eggs in the year following a lemming shortage, according to another ArcticNet study presented by Gilles Gauthier from the Centre d’études nordiques, Université Laval.

“In low years,” adds Bilodeau, “they will have an impact on shore birds and snow goose as well because predators will eat more eggs of shore birds when there are no lemmings. So they influence everything.”

Which brings us back to the white stuff.

According to the federal government’s 2007 From Impact to Adaptation report, precipitation in northern Canada has increased by 1.4 per cent a decade from 1900 to 2003, with more pronounced increases across the tundra and in the mountain regions of Baffin Island where Bylot Island is located.

The problem is, while large snowfall events in northern Canada have increased in the past few decades, some studies also show a greater proportion of that increased precipitation is falling as rain.

This makes climate change a good news-bad news story for the lowly lemming.

“It’s is pretty unpredictable. As temperatures rise, probably the Arctic will become more humid. With more humidity, there will likely be more snow in the coming years,” says Bilodeau, pausing before adding, “until there’s no more snow. It will melt faster and the snow season will be shortened.”