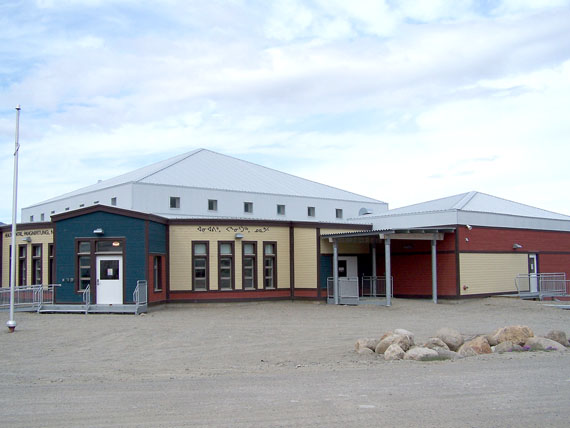 The much-delayed Pangnirtung Health Centre, which has actually been serving patients for several months, opened “officially” on July 14.

After suffering one delay after another, Pangnirtung’s new heath centre is now open for business.

The new centre, which officially opened this month, is nearly three times the size of the old one so for the first time in years, health staff don’t have to squeeze into office spaces to tend to the community’s growing population.

“The building is really needed because the old one was built 34 years ago,” said Pangnirtung MLA Adamee Komoartok, who helped cut the ribbon July 14 to open the new centre. “It served the purpose of a small community, 800 to 1,000 people, and we needed an expanded facility.”

“It was hard to provide consistent services to Pangnirtung because it was just so small,” said Debbie Merritt, supervisor of Pangnirtung’s community health programs, about the former nursing station.

There, Pangnirtung’s dietician worked out of a staff room, and when a doctor visited town he’d have to displace a nurse from her work space, she said.

The much larger space offered by the new centre now allows specialists like the community’s mental health nurse to have her own room where she can meet with patients.

The means allows patients in need of specialized treatment can get it in Pangnirtung rather than travelling to Iqaluit.

Although the health centre is not meant to serve as an overnight facility, there are two beds for adults and two for children in cases where a medevac to Iqaluit is delayed by weather.

Its new maternity room has already seen a delivery, thanks to a short-notice birth with no time for a trip to Qikiqtani General Hospital.

The new building is so large that the health offices are now located on the second floor, while social services are on the first floor.

The original opening date for the health centre was to have been November 2008, but construction fell behind schedule.

Then, furniture for the building wasn’t booked on the 2008 sealift because Pangnirtung lacked a place to store it.

The furniture was supposed to come in on the 2009 sealift, but the Department of Health and Social Services’s lead manager on the project fell ill and the project apparently slipped through the cracks of the understaffed department.

As soon as all the required furnishings were shipped in to Pangnirtung by air last May, the move went into high gear.

Health workers had gradually moved into the new health centre over the past year and a half, transferring material not used on a daily basis, such as old patient files.

But the biggest moving day was June 18, when staff moved enough material in to start actually working in the new building.

There’s no information yet on how far over the original budget this project ran due to the costs of heating the empty building over a winter and the expensive air freight of the furnishings.

Repeated inquiries to the Department of Health and Social Services for more information were not returned by deadline.