Children’s thoughts on violence go to every household 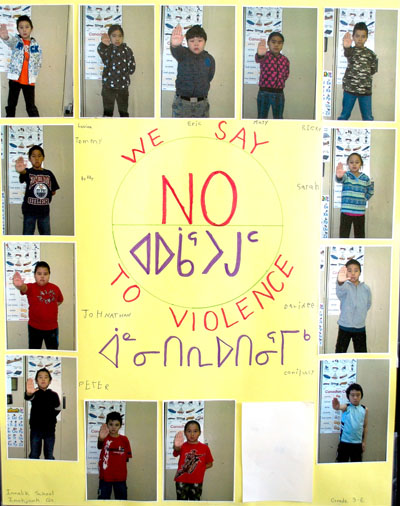 These children say no to violence. Their messages were gathered in a poster contest held by the regional organizing committee for the Nunavik Day for the Elimination of Violence. (IMAGE COURTESY) 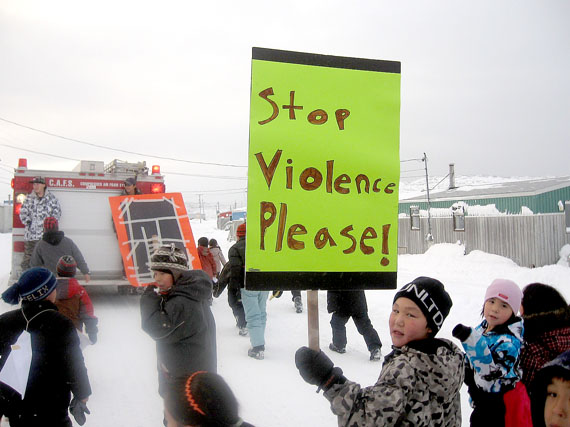 Schoolchildren in Akulivik participate in a march against violence last November. (PHOTO BY DANIELLIE QINUAJUAK)

Inside, a calendar presented drawings and thoughts by youth across the region, showing how they feel about violence.

“When a mother have (sic) been hurt, the whole house has been hurt,” writes Lucy Tukai Iyaituk of Kangiqsujuaq.

The package is one tool in a campaign for the elimination of violence, put together by Nunavik’s regional board of health and social services and other partners.

“This is a message from the region’s youth, and they’re sending a very powerful message,” said Sylvie Ricard, a family violence and sexual abuse planning agent with the health board.

Ricard sits on a regional organizing committee for the Nunavik day for the elimination of violence.

On November 25, 2010, Nunavik acknowledged its second annual day, with marches held in many communities.

Modeled after the United Nation’s international day for the elimination of violence against women, Ricard and the rest of the committee have tried to make the day more relevant to Nunavik.

“We were told we should do something that encompasses a larger group, because in Nunavik, violence is something that affects the whole family,” she said.

While violence continues to affect many Nunavimmiut women, the Nunavik campaign wants to draw attention to violence in general.

The campaign package includes a resource card so Nunavimmiut know where to go for help – including contact information for the region’s four women’s shelters.

Local representatives have taken up the cause, too, coordinating events in their own communities.

In Umiujaq, for example, a local committee came up with the slogan “Love is stronger than violence,” and distributed white ribbons at a November 25 march.

In Quaqtaq, they took to the local FM airwaves to spread their message and coordinate school activities.

“From what I’ve heard, people are saying that it’s about time we did something to speak out against violence,” Ricard said. “We’ve had a great response and I’m surprised how quickly these groups have organized events.”

In a 2004 report on violence in Nunavik, more than half (53.6 per cent) of Nunavimmiut claimed to have been the victim of physical violence during their adult life.

The report, titled Qanuippitaa, revealed the most common forms of violence included being pushed, shaken, struck or kicked. About 20 per cent of Nunavimmiut adults reported being thrown (into walls, down the stairs, etc.) strangled or assaulted with a knife or firearm.

The rates of violence were shown to be higher in Kuujjuaq as well as in other communities where alcohol can be purchased.

Qanuippitaa also reported that one in three Nunavimmiut adults had experienced some form of sexual abuse before they reached the age of 18.

In the same survey, Nunavimmiut identified the need for healing sessions, professional counselling and reduced alcohol consumption as a way to discourage domestic violence in the region.

Ricard, along with the regional committee, say they will gather again in the spring to prepare for the November 25, 2011 event, with the hopes of growing the campaign and spreading awareness activities out over a larger period of time.

“This campaign is only one of the steps we do to try and raise awareness of the issue of violence,” Ricard said, “but we need to continue.”