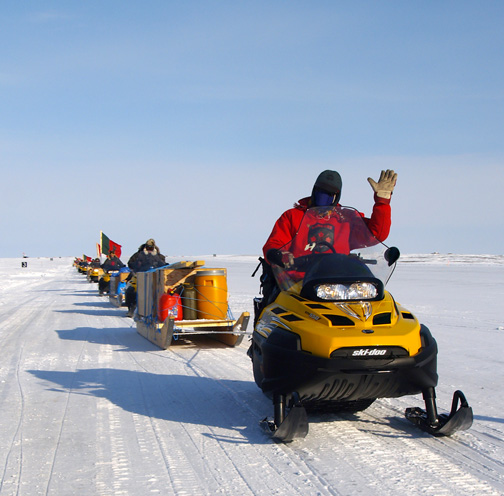 A Canadian Ranger waves as he returns from patrol to Canadian Forces Base Alert during Operation Nunalivut this past April. The Canadian Forces are one of the backers of the Polar Communications and Weather satellite project, which provide greater satellite coverage f0r Northern Canada. (PHOTO BY CHRIS WINDEYER)

The Polar Communications and Weather (PCW) satellite project is still in the planning stages, but could be ready to put satellites into orbit as soon as 2016, said Catherine Casgrain, the project’s deputy manager at the Canadian Space Agency.

“If you end up with higher capabilities in communications and weather forecasting in the North, it can create some new opportunities for development,” Casgrain said in a telephone interview from the agency’s headquarters in Montreal.

Each of the two satellites would orbit the Earth every 12 hours, providing 24-hour coverage and filling in an area not fully covered by current satellites, which fly over the North much less often.

The result for weather forecasters is less detailed satellite imagery of weather patters, which makes it harder to make accurate forecasts.

Environment Canada draws information from six to eight polar orbiting satellites at a time, plus other satellites like the Canadian RADARSAT orbiters.

But Environment Canada needs a satellite that provides dedicated, constant coverage on the North, said Mike Manore, who manages the reception and processing of satellite data for the Meterological Survey of Canada.

Current polar orbiters “provide very good detail, but they don’t provide an ongoing, continuous view of the North. They’re sort of ribbons or swaths that come by every hour and a half or three hours or so.”

Weather forecasters take that data and combine them with observations from ground weather balloons and stations, such as those found at airports.

In the North, those stations are much fewer and farther between, which leaves gaps in the information meteorologists have available to build computer models of weather systems.

Manore said the PCW satellite will help fill those gaps.

“The expectation is it will certainly increase our forecast accuracy,” he said.

“This is exactly the kind of service we want to improve in the North,” she said.

The Canadian Forces are also involved in the project because they have their own communications problems in the North. The military needs access to satellite signals for communications and increasingly sophisticated computer systems.

“Everything (the Canadian Forces) do in the North requires some communication capabilities and right now the service they get is not very reliable,” Casgrain said. “So this will be a big advancement in their operational capabilities.”

After about 70 degrees North latitude it becomes impossible to capture bandwidth from the geostationary satellites that orbit above a fixed point on the Earth’s equator.

There are satellites that provide coverage to the polar regions, but during Operation Nunalivut near Alert this past April, military commanders learned about the limits of global positioning system equipment above 80 degrees North.

The command centre at Alert could keep tabs on patrols of soldiers and Canadian Rangers who had fanned out across a large area off the tip of Ellesmere Island.

But the system, powered by equipment on loan from the Iridium satellite network, had problems sending photos and data, useful for directing soldiers in the field. Nor were the signals fully secure.

The PCW project could cost as much as $600 million, although Casgrain said that figure will come down, as the CSA finds other countries to get involved.

The CSA is in talks with the European Space Agency, the National Oceanic and Atmospheric Administration in the United States and other agencies, Casgrain said.

It’s a common practice for one nation’s satellite to carry equipment from other nations, and Canada, like many countries, lacks the ability to launch its own satellite into orbit. So the CSA is looking to make deals.

“There’s a lot of interest in the missing (polar) information,” Casgrain said.

Manore said this kind of sharing is common in the scientific community, especially with space-based research, which is extremely expensive. That marks a shift from the early days of space exploration, when projects, matters of national pride and military strategy, were highly secret.

“Space has turned from a very competitive area to a very collaborative and cooperative area,” he said.