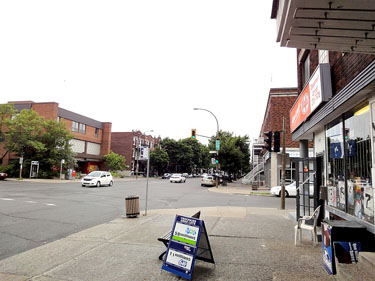 The old Chinese hospital at St. Denis and Faillon East in Villeray, as seen from a depanneur located on the opposite corner. Members of a newly-formed citizen group showed up July 6 at a meeting of the Villeray-Saint-Michel-Parc-Extension borough council to show their support for plans to renovate the building into a new patient home for Inuit. (PHOTO BY JANE GEORGE)

A group of residents in the Montreal neighbourhood of Villeray want their borough council to lift a moratorium that prevents the renovation of a former Chinese hospital into a patient residence for Nunavik Inuit receiving medical care in the city.

The newly-formed citizens group showed up July 6 at a meeting of the Villeray-Saint-Michel-Park-Extension borough council to show their support for plans to renovate the former Chinese hospital at St. Denis and Faillon East.

While the project has faced hostility from some residents in the neighbourhood, Genevieve Beaudet, the group’s spokeswoman, said the patient residence — which could house about 150 patients and residents — would contribute to the neighbourhood by making it more diverse.

But borough officials insist they want to see an impact study and consultation before the project moves forward, admitting this is the first time they have used such a measure to stop the development of a project.

Until then, the 15-member group want Nunavimmiut to know that they are welcome in the neighbourhood.

Responding to some controversial comments made by the borough mayor and its residents about the project, Beaudet said “Please excuse us.”

“I’m not responsible for those comments, but I make up a part of this community,” she said. “I want Inuit to know that it’s not everyone that shares these ideas. We want to welcome them the best we can.”

Beaudet called the controversy “unfortunate,” saying the conflict stems from poor communication between officials and bureaucrats.

“There’s a huge communication problem between the (Montreal) health agency and borough office,” Beaudet said. “It’s too bad. I think both administrations should start working better together.”

“But I have a positive feeling that all this media noise is going to help,” she added.

Regardless of whatever group ends up occupying the former hospital, which some want to see renovated into a home for senior citizens, it will have an impact on the surrounding community, said Beaudet, who also agrees that the site should be studied first.

Exactly when an impact study would be presented to the borough is unsure.

The Montreal health agency is currently helping put into place an implementation committee, made up of citizens and borough officials.

Their mandate has yet to be established, said Montreal health agency spokeswoman, but they will oversee an impact study on parking and traffic around the St. Denis site.

Attending the July 6 borough meeting was Allison Irqumia, head of the Association of Montreal Inuit. Irqumia told reporters afterwards that she wants Samson to apologize for her negative comments about plans to renovate the hospital, which has stood empty for more than 10 years, into a patient residence for Nunavimmiut.

Joey Flowers also listened in Tuesday evening — the Montreal-based Inuk wanted to hear the debate over the vacant hospital for himself.

“I think the hostility has really toned down quite a bit,” Flowers said, “But I got the feeling that there was more to their scepticism than just lack of information.”

“I’m still upset that there were racist attitudes manifested (in Villeray.)”

More than 600 people have recently joined a Facebook group called “Contre le racisme. Pour un hospital pour Inuits dans Villeray” (Against racism. For a hospital for the Inuit in Villeray).

The new group in favour of the resident says the patient residence will better allow local residents to have a cultural exchange with Inuit visitors.

“This neighbourhood is very multicultural,” Beaudet said. “And since this discussion started, I’ve already discovered so much about the Inuit culture, like Makivik Corp., Avataq Cultural Institute and Montreal’s aboriginal community.”

Health officials previously hoped that about 150 Nunavik patients and their escorts could use that St. Denis facility within 18 months.

Now it appears that Nunavimmiut will wait at least two years – but that’s only if the moratorium is lifted.

David Levine, head of Montreal’s health agency, has said there is an urgency to relocate because the environment around the current Nunavik House is “inappropriate” and “unacceptable.”

To build a new patient residence elsewhere would cost at least $50 million, he said, but to renovate the former hospital would cost only about $12 million.