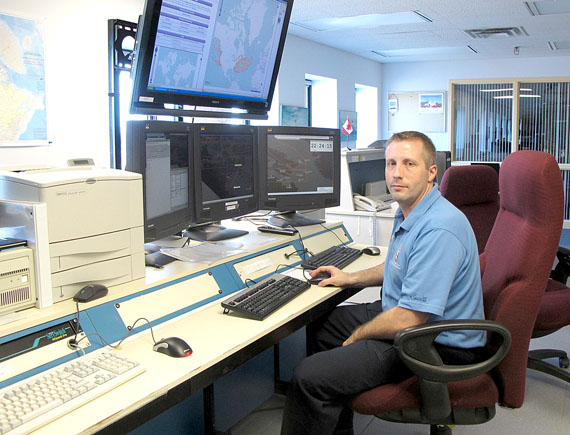 With new rules now in effect for marine traffic in Canada’s northern waters, the Iqaluit Coast Guard outpost that monitors maritime traffic in Arctic waters is responsible for watching more ships than ever before.

While the Coast Guard’s white and red Marine Communications and Service Centre has dominated Iqaluit’s shore for years, many don’t even know what goes on inside the imposing structure because it’s staffed only during the summer, when many Iqalummiut are out of town.

Robert Lantaigne, one of two marine communications and traffic services officers on shift, walked Nunatsiaq News though some of the operations he’s responsible for, including the new NORDREG regulations for marine traffic in Canada’s Arctic waters.

The Iqaluit centre has monitored this region since 1996, when it took over from the Atlantic station in St. John’s, Newfoundland, Lantaigne said.

Until July 1, 2010, registration with NORDREG has been voluntary, with the decision about whether to register left up to the individual ship captains.

Lantaigne estimated about 99 per cent of commercial traffic already complied with NORDREG even before this was mandatory.

But the mandatory rules now also apply to other marine industries in Canada’s waters north of the 60th parallel and up to 200 nautical miles (340 kilometres) offshore.

The list of what qualifies as a pollutant or dangerous good fills an entire page, Lantaigne said.

“In the North, almost everything is a pollutant,” he said.

The most common potentially dangerous cargos transported through the Arctic include oil and diesel — not including the fuel in the ship’s own fuel tank — and ammonium nitrate, a chemical fertilizer which is also an explosive.

But no matter what they carry, ships must now contact the Iqaluit centre upon entering Canadian waters and send in a sailing plan report including destinations and routes, crew complement, cargo, vessel specifications and other information.

And ships must report once a day at 4:00 p.m. Universal Standard Time (11 a.m. EST) by email, fax, radio or satellite telephone.

Ships must also notify the Iqaluit centre when they stop at a new community and then fill out a new sail plan report when they leave.

All this information is flagged on a map.

Ships in communication with the Marine Communications and Service Centre may get recommendations for routes once the staff there look at the ship’s characteristics and at local conditions.

For example, they may see the ship’s ice class category is not suitable for the waters it’s headed for, and provide a possible alternate route.

But whether or not to follow that recommendation is always up to the ship captain.

Only vessels that belong to the Department of National Defence and NATO are exempt from these new regulations.

Vessels that now have to register include tugboats that carry sealift to western Nunavut and the Northwest Territories from Tuktoyaktuk, as well as mining industry tugboats operating inland in the Kivalliq region.

“Now these will have to report to us as well,” Lantaigne said.

Baffin Fisheries Coalition CEO Jerry Ward wouldn’t say how many BFC boats have voluntarily registered or not in the past.

The decision was left up to the individual captains, Ward said — although the fishing industry had known the new rules were coming for a long time and BFC ships were prepared for the additional paperwork.