Pending a trial, project could proceed at a later date, Cooper says 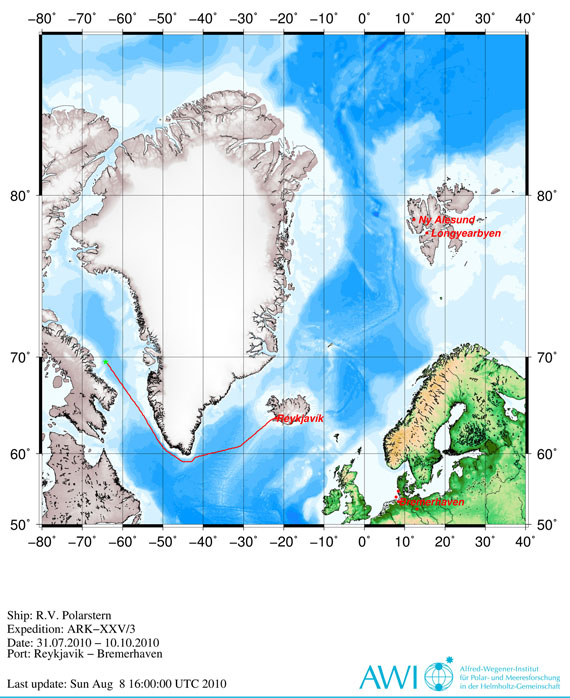 This map shows the position that the RV Polarstern reached by the early afternoon of Aug. 8, just before Justice Sue Cooper issued a temporary injunction that blocks Natural Resources Canada from using the vessel to conduct seismic testing until after the issue is settled in a trial. (ILLUSTRATION HARVESTED FROM WEBSITE OF ALFRED WEGENER INSTITUTE)

Justice Sue Cooper granted a temporary injunction Aug. 8 that prevents the start of a seismic testing project in ocean waters off north Baffin Island, pending resolution of the relevant legal issues in a trial.

“I find the Inuit of North Baffin would suffer the greater harm if injunctive relief were not granted,” Cooper said in her decision.

Cooper granted the injunction after lawyers from the Qikiqtani Inuit Association went to court Aug. 4 this past week to block the project, which was to have been conducted for Natural Resources Canada by scientists aboard the German research vessel Polarstern.

The QIA lawyers argued that loud, persistent noise created by an air-gun array to be used in the seismic project could cause “irreparable” damage to marine mammals and therefore damage the ability of North Baffin Inuit to harvest food and maintain their culture.

They also argued the Government of Canada’s attempts to communicate with people living in five North Baffin communities did not constitute “meaningful consultation” as required by current case law, by the terms of a screening decision issued by the Nunavut Impact Review Board, and by the terms of a licence issued by the Nunavut Research Institute.

• a temporary injunction to stop Canada from conducting the seismic test project; or

• a suspension or quashing of the research licence granted by the Nunavut Research Institute.

Lawyers for Canada and Nunavut responded by saying their clients performed all their legal and constitutional duties and that they complied with the consultation process set out in the Nunavut land claims agreement.

Cooper did not rule on the question of whether the two governments fully performed their duty to consult and she pointed out that the full legal scope of “the duty to consult” is still not settled.

“Clearly, the law in this area is complex and evolving,” Cooper said.

But she did find that QIA lawyers raised “a serious issue” that justifies holding a full-blown trial to settle the issue.

“I am unable. nor is it necessary, for me to determine at this stage the true nature or the value of the consultations that did take place. That will be an issue for the trial judge,” Cooper said.

She also said the duty to consult does not mean that governments have a duty to reach agreement with aboriginal people before governments can do certain things.

“There is no aboriginal veto over government decisions,” she said.

On the question of irreparable damage, Cooper weighed and balanced various scientific reports and affidavits presented by lawyers from each side, including statements from hunters and other North Baffin residents.

While she found that statements from North Baffin residents expressing opposition to the seismic testing project are “of no assistance in answering the questions before the court,” she did find that QIA lawyers presented more than enough evidence to support the idea that seismic testing could likely do serious damage to marine mammals.

But she also cited evidence submitted to the NIRB by the Oceans North environmental group that suggests seismic testing causes marine mammals to change their migration routes.

Oceans North had included information from hunters Sam Omik and Jaypetee Akeeagok, who said that seismic testing in the narrow channel between Cobourg Island and Devon Island could divert marine mammals from their normal migration into Jones Sound.

Government lawyers, on the other hand, argued that the QIA established only a potential for harm, not a guarantee of harm.

But Cooper found that not granting a temporary injunction now could expose the Inuit of the five affected communities to irreversible harm. She also found that the degree of harm that an injunction would inflict on the government — a financial loss — is less serious.

“Any loss that Canada might suffer if the testing does not proceed as scheduled is largely a financial loss which is quantifiable and compensable,” she said.

But she said the QIA should get ready, if necessary, to compensate Canada for the financial loss. “The QIA will be required to provide an undertaking to compensate for damages,” she said.

It’s not clear when a trial on the main issues in the case will be held, what form it will take — or if the federal government will decide to abandon the project

Meanwhile, by Aug. 8 the Polarstern lay in the middle of Baffin Bay, on the Canadian side of the international boundary, near the area where its scientists were to have begun seismic testing and other research.

It’s not clear what the vessel’s crew will do now, or if they still have permission to conduct all the other forms of research — such as ocean water sampling, bathymetry, and tests for methane — that its crew planned to conduct at the same time as the seismic project.

Or read this version: