“It is time for Nunavut to begin” 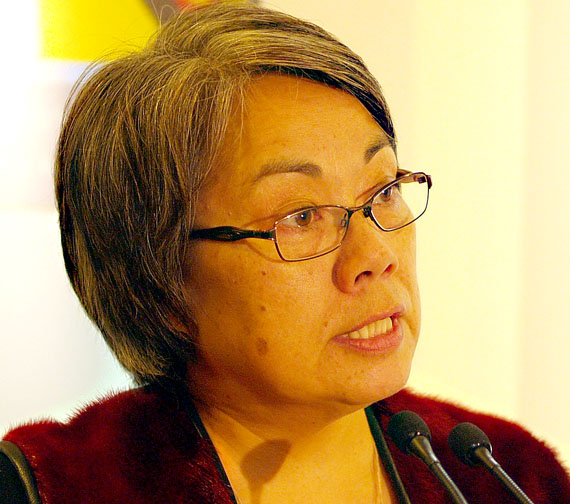 Nunavut premier Eva Aariak speaks during a news conference in Iqaluit in September, 2011. Aariak said a devolution agreement-in-principle between the Northwest Territories and the federal government means Ottawa should sit down and bargain with Nunavut next. (PHOTO BY CHRIS WINDEYER)

The Northwest Territories’ new devolution agreement with the federal government has Nunavut eyeing a deal of its own.

Late last month, the Government of the Northwest Territories reached an agreement-in-principle with Ottawa on an accord that would transfer control over the territory’s lands and resources to Yellowknife.

“The experience of all three territories shows the importance of getting started with formal negotiations,” Aariak said in a statement. “The Yukon negotiations stretched out over seven years.

In the NWT, it has taken nearly a decade to reach the AIP. It is time for Nunavut to begin our formal negotiations.”

Nunavut wants a devolution deal to gain more control over lands and resources inside the territory, and to the royalties that would flow from the development of mines, oil and natural gas.

The NWT agreement remains controversial there. It has the backing of the Inuvialuit Regional Corporation, and the Metis nation reportedly plans to sign on as well.

Nellie Cournoyea, chair of the Invialuit Regional Corporation, said the agreement is logical extension of the IRC’s land claim, the first one signed in the NWT in 1984.

“Today we take another step as a signatory to this agreement-in-principle on devolution to achieve our goals,” Cournoyea said.

“People are not against that. They want to be equal partners and they want to participate in developing the future of the North in a positive way.”

And one woman shouted, “You’re selling out our territory” at Roland during the signing ceremony in Yellowknife Jan. 26, CBC reported.

But the NWT has a patchwork of land claims in varying stages of completion.

In Nunavut there is only one, the land claim agreement that created the territory. And Nunavut Tunngavik Inc. has been a backer of the GN’s push for a devolution deal with Ottawa.

NTI and the GN would both sit at the bargaining table and both parties signed on to a “negotiation protocol” in 2008.

But Ottawa has yet to assign a chief negotiator to the file.

Federal politicians heaped praise on the NWT agreement. Leona Aglukkaq, Nunavut’s MP and the Harper government’s political minister for the North, called the deal a “milestone.”

And John Duncan, the Minister of Indian and Northern Affairs, who signed the agreement-in-principle on behalf of the federal government, called it “an important step forward for the people of the Northwest Territories.”