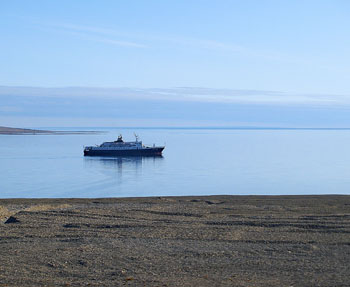 The Canadian government has put the world on notice that ships entering the country’s Arctic waters will be subject to new mandatory vessel-tracking rules next week aimed at preventing terrorist activity and pollution while improving search-and-rescue capabilities in the Far North.

But the strict new measures — generally welcomed by opposition parties and specialists in northern geopolitics — have raised some concerns with the U.S. government, it was revealed at a news conference in Ottawa June 22.

Polar experts had pressured the federal government for years to replace Canada’s voluntary NORDREG ship-registration system for northern maritime traffic, widely seen as inadequate in an era when melting ice and rising global interest in Arctic tourism, science and economic development are increasing ship traffic in the region.

The government announced in late February it was doing just that.

“Our government and Prime Minister Harper have always asserted that a strong and sovereign Canada depended on a healthy, prosperous and secure North,” Shea said.

“The world has their eyes set on the unprecedented economic growth opportunities, in particular in the mining and oil and gas sectors,” she added. “We can all expect this to mean more shipping in the Arctic.”

But a senior Transport Canada official acknowledged that the U.S. — which views the Northwest Passage as an international strait beyond Canada’s exclusive jurisdiction — expressed “mixed” feelings about the new regulations.

“The U.S. has sort of a mixed view of it,” the official stated. “They recognize for the purposes of pollution prevention and safety of navigation, that such measures are a good idea. On the other hand, they do like to maintain the freedom to navigate. They’re keen about that — they have a large navy.”

Under a long-standing arrangement that acknowledges Canada and the U.S. “agree to disagree” on the legal status of the Arctic shipping route, U.S vessels voluntarily alert Canada to their planned presence in the passage and Canada agrees not to interfere with their voyages.

The new ship-tracking regime, called the Northern Canada Vessel Traffic Services Zone, will regulate the movement of cargo carriers, cruise ships and other large vessels moving through the Northwest Passage and throughout the waters of the Canadian Arctic archipelago.

The system falls short of a recent Senate committee’s recommendation that all sizes of vessels should be forced to register their northern voyages with the coast guard.

The government’s plan requires mandatory registration for ships of 300 tonnes or more, for tugs with a two-ship weight of 500 tonnes or more and for any vessel carrying dangerous goods or potential pollutants.

The new rules, Shea stated, will work to prevent pollution of Arctic waters and also to help the coast guard and other federal agencies respond quickly to oil spills, search-and-rescue requests and other northern emergencies.

In announcing the planned measures in February, the government had pointedly noted that, “the proposed regulations would apply to both Canadian and foreign vessels, and are consistent with international law regarding ice-covered areas.”

But as early as 2008, when Harper first indicated his governmentصs intention to move toward a mandatory ship-registration system, he acknowledged that the move could rile other nations.

“It’ll be interesting to see,” he said during an August 2008 visit to the Arctic. “I expect that some countries may object.”

But he added: “I think it ultimately is in everybody’s interest to ensure there is some kind of authority in the area, some kind of environmental and commercial authority… We have no particular power play here.”

“These measures will send a clear message to the world: Canada takes responsibility for environmental protection and enforcement in our Arctic waters,” Harper said when those measures were introduced.