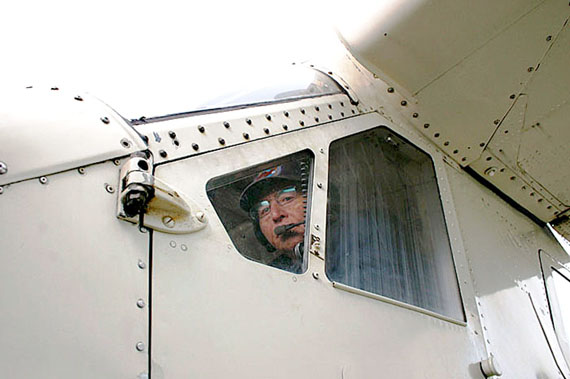 Johnny May, Canada’s first Inuk bush pilot, has logged the equivalent of four full years in the sky since he started flying in the 1960s. (PHOTO COURTESY OF KIEN PRODUCTIONS)

If you’ve ever dreamed about co-producing a film, this might be your chance.

A documentary in the works about Inuk pilot Johnny May is looking for investors to help finance the production of the film.

Les Ailes de Johnny May (the wings of Johnny May), by Quebec writer-director Marc Fafard, is a three-dimensional French-language documentary showing Nunavik through the eyes of the famous pilot.

A French film production platform called Touscoprod has teamed up with Montreal’s Festival du nouveau cinéma to raise the $40,000 to complete the film.

Through Touscoprod, you can sponsor the film for a minimum of $15 anytime between now and November 2011.

Depending on the amount of your contribution, investors can receive a DVD of the film, invitations to screenings and other perks.

Touscoprod’s Nicolas Bailly says they partner with independent films that rely on outside investment for support.

They also look for films with the good aesthetics, films that are economically realistic and those have the potential for strong community support, and Bailly says the Johnny May documentary fits all three criteria.

Films that don’t make their target will refund their contributors 100 per cent, he added.

So far, the Johnny May documentary has gathered $755 from seven investors.

The Paris-based Touscoprod has helped to finance 16 films so far and they just launched a Canadian website.

You can watch a clip from the documentary and make a contribution here: http://www.touscoprod.com/ca/pages/projet/fiche.php?s_id=1&id=5&video=bande-annonce

Johnny May, now 65, started flying in the 1960s and has logged 34,000 flight hours in his career, the equivalent of four full years.

May was inducted into Quebec’s Aerospace Hall of Fame last November.