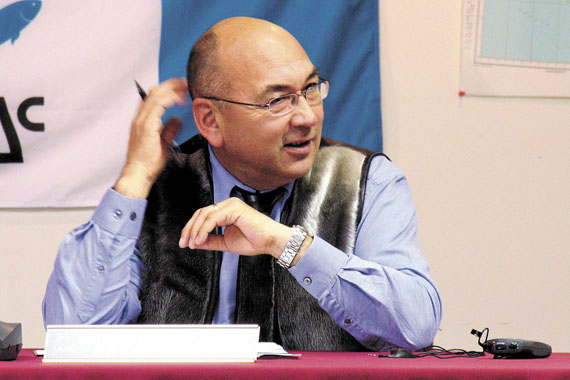 James Igloliorte, head of the Qikiqtani Truth Commission, takes evidence from witnesses at a hearing in Iqaluit held in June of 2008. (FILE PHOTO) 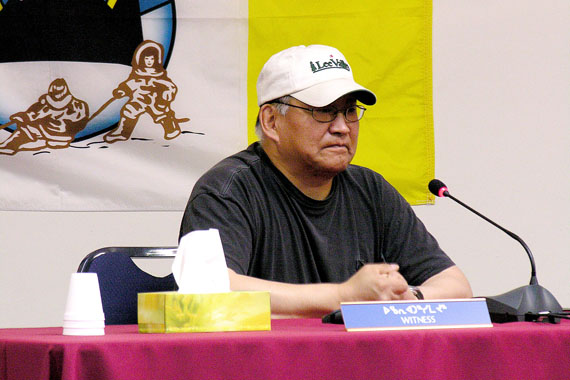 Saila Kipanek of Iqaluit tells his story to the Qikiqtani Truth Commission at a hearing held in June, 2008. “I was surprised by the degree of emotion that Inuit were expressing and how the recounting of memories, either because they were speaking out of personal experience or speaking on behalf of a family member, how vivid these memories were,” retired judge James Igloliorte said. (FILE PHOTO)

The Government of Canada must formally acknowledge that the Qikiqtani region’s numerous social ills are rooted in the many traumas of the 1950s, 1960s and 1970s, the Qikiqtani Truth Commission recommends in a report released Oct. 20. (See the document embedded at the bottom of this page.)

That’s just one of many recommendations listed in the report, which asks the federal government to acknowledge that “levels of suicide, addiction, incarceration and social dysfunction found in the Qikiqtani region are in part symptoms of intergenerational trauma caused by historical wrongs.”

The truth commission is rooted in a 12-year-old campaign by the Qikiqtani Inuit Association to seek an apology and compensation from the federal government for the arbitrary killing of Inuit dogs in the eastern Arctic.

But when they appointed Igloliorte and set up the commission in late 2007, QIA leaders gave the body a much broader mandate: to review all actions of government that scarred the lives of Inuit, especially in the years between 1950 and 1975.

“It was the entire package of perceived wrongs and perceived mistakes that really traumatized Inuit,” James Igloliorte, the retired Labrador judge who heads the commission, said in an interview.

Those “wrongs” and mistakes include:

• the federal government’s clumsy handling of the tuberculosis epidemic, which produced the unexplained disappearance of family members who were shipped to sanatoria in southern Canada, often for many years;

• numerous botched relocations and the coercive closure of communities, including the bungled relocation of Inuit from South Camp to North Camp in the Belcher Islands, the closure of Kivitoo and Padloping Island, and the movement of Inuit from Cape Dorset to Dundas Harbour and Arctic Bay;

• the failure to provide adequate housing in new settlements, even when housing was promised;

• clumsy attempts to provide schooling to Inuit children, using a curriculum that prohibited the use of Inuktitut;

• a failure to deal with substance abuse after Inuit moved into settlements;

• the widespread killing of Inuit sled dogs, which was often done without explanation;

• poor communication with Inuit by government officials concerned mainly about career advancement rather than the consequences of their actions.

“I was surprised by the degree of emotion that Inuit were expressing and how the recounting of memories, either because they were speaking out of personal experience or speaking on behalf of a family member, how vivid these memories were,” Igloliorte said.

Starting in early 2008, Igloliorte and his staff travelled to every community in the Baffin region, taking oral testimony from more than 200 people, most of them Inuit.

They also pored through public archives for documentary evidence and used an additional 150 pieces of oral testimony that the QIA gathered before the creation of the commission.

“I’m very satisfied that we can paint an accurate picture of this time period, because we accept the testimony of the Inuit who came before us,” Igloliorte said.

In addition to the main report, the commission is also preparing a series of supplementary reports on specific issues and a social history of each community in the Qikiqtani region.

They’ve already finished a separate report on relocations, which was released Oct. 20, along with a study on Canadian colonialism in the Arctic between 1950 and 1975.

As for the dog slaughter issue, they are still working on a separate report that will respond to a 2006 review of dog killings produced by the RCMP.

But they reject the idea of individual compensation payments.

“For the most part, we were told by elders, we were told by people who had gone through the healing process, that individual compensation is fleeting. It leads to more problems in most cases.

“What is lasting and what has the best long-term impact is when people are led through a healing program,” Igloliorte said.

Here are some of the commission’s other recommendations:

• QIA should present the report to the Government of Canada and request formal acknowledgment of its findings;

• governments should ensure social, mental health and addiction workers and programs are available in all Nunavut communities;

• the QIA and the RCMP should formally recognized the role played by Inuit special constables;

• the federal government should help defray the costs of Inuit who want to locate and visit the burial sites of family members who died in southern Canada while receiving medical treatment;

• governments and Inuit organizations should take various steps to strengthen Inuit governance, and do more to advance Inuit aspirations and goals;

• the QIA should develop a program to help Inuit develop and use governance skills;

• the QIA should develop a framework to guide consultation with Inuit;

• historical material from QTC reports should be used in Nunavut schools;

• the QIA should promote an Inuit History Month;

• governments should fix Inuit housing needs by ensuring safe and adequate housing for all Inuit.

And now that the commission has finished most of its work, Igloliorte said he hopes the QIA will lobby governments to act on its recommendations to make the commission’s materials widely available.

“QIA, having commissioned this piece of work, should do something with it so Inuit get a chance to see how we recorded their history,” he said.

The Inuktitut version of the report is available here.