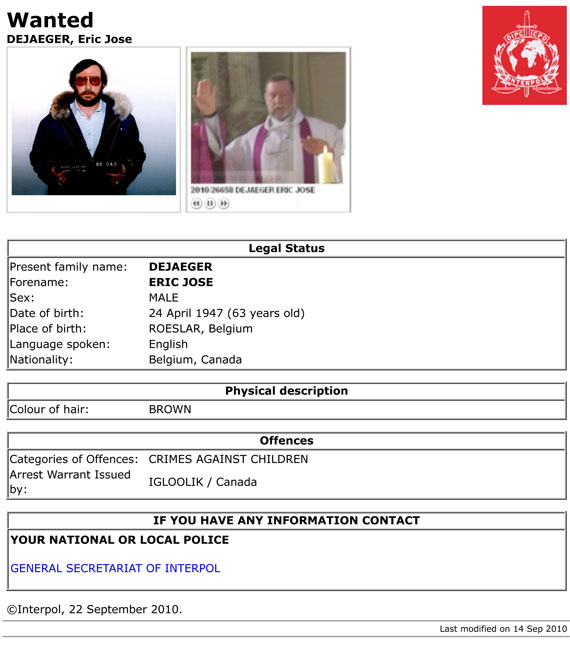 This past Sept. 14, Interpol issued a new arrest warrant for Father Eric Dejaeger. 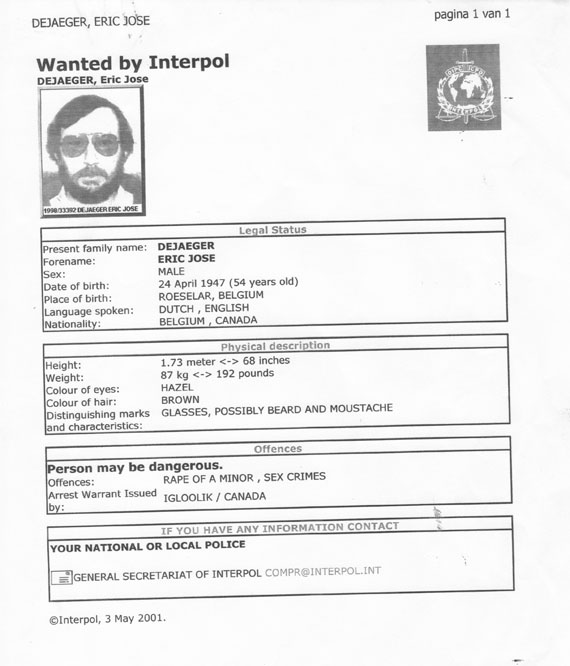 In 2001, Interpol issued this arrest warrant for Father Eric Dejaeger. 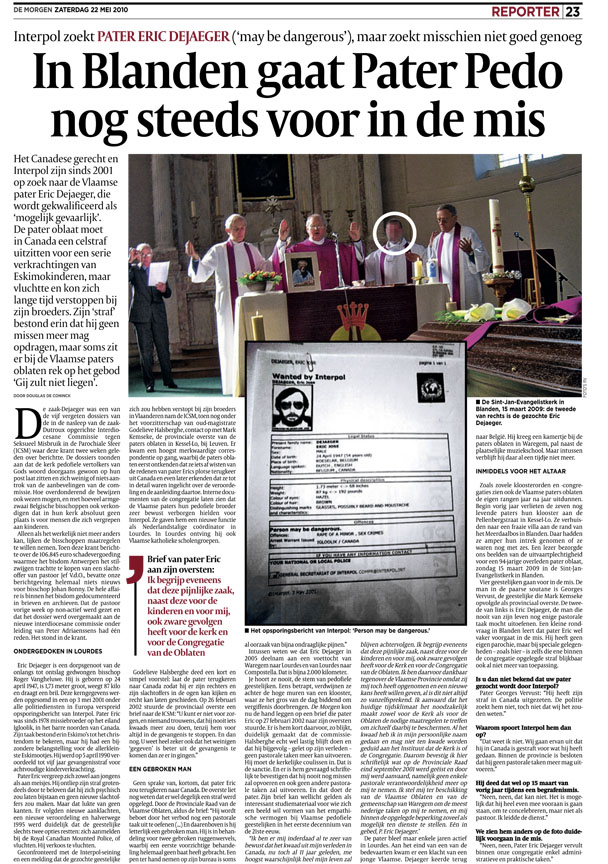 The dormant case of Father Eric Dejaeger came back to life after the De Morgen newspaper in Belgium published this story, part of a series alleging the sexual abuse of children by Roman Catholic priests. 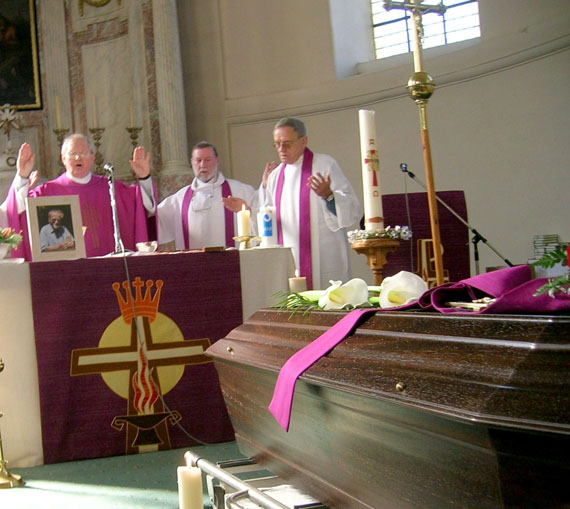 Father Eric Dejaeger co-celebrating mass at St. John the Evangelist Church in Blanden with two other priests on March 15, 2009, despite an order from his provincial council in 2001 to stop performing pastoral duties.

If Father Eric Dejaeger ever returns to Igloolik, he won’t find many outstretched arms or welcoming smiles.

“The people never had a chance to vent their anger at him,” said an Igloolik woman who remembers the disgraced Roman Catholic missionary’s unhappy sojourn there between 1978 and about 1982.

That anger arises from a big piece of unfinished business: a 15-year-old set of criminal charges for which Dejaeger, now 63, has never been brought to trial: three counts of indecent assault and three counts of buggery.

Cpl. Tom Power, then an RCMP member stationed in Igloolik, laid those charges — all alleging the sexual molestation of Igloolik children — on Feb. 19, 1995, after a lengthy investigation he conducted in 1993 and 1994.

But no Canadian court ever dealt with them, despite bench warrants issued by the Nunavut court in 1995 and 2002, and an international arrest warrant issued by Interpol in 2001.

Dejaeger, after serving out jail sentences imposed after earlier convictions on sex charges arising from his time in Baker Lake between 1982 and 1989, failed to appear at a court sitting set for June 13, 1995.

The disgraced priest had by then fled Canada for Belgium, the country of his birth. For now, he continues to reside there, with a small group of Oblates at a large country villa near the town of Blanden.

Igloolik residents, all of whom asked for anonymity because of their positions in the community, remember Dejaeger with distaste.

“I don’t know why, but as soon as I saw him I didn’t like him,” one Igloolik man said.

While in Igloolik, Dejaeger served under Father Robert Lechat, with whom he stayed at the community’s Roman Catholic mission.

Unlike the beloved “Ataata Lechat,” who spoke Inuktitut fluently and lived in the community for many years, Dejaeger never made a good impression on his Inuit parishioners.

Another described him as a “difficult person.”

As for allegations of child abuse, some residents remember Power’s investigation and the subsequent charges, but no one remembers much talk of the matter within the community

“Nobody ever talked about that here,” a woman said.

In Belgium, however, Dejaeger’s story has been the subject of some very loud talk.

A series of articles by journalist Douglas De Coninck in the Flemish-language De Morgen newspaper created an uproar in the country this past May, in relation to a series of child sex abuse scandals involving Roman Catholic priests.

In those articles, De Coninck castigates Roman Catholic authorities in Belgium and Canada, accusing them of protecting Dejaeger.

“Internal documents of the congregation show that the Flemish fathers deliberately hid their pedophile brother from Interpol,” his May 22 article alleges.

And he accuses the Belgian church of attempting to mislead an inquiry led by a magistrate named Godelieve Halsberghe, who compiled a lengthy dossier on Dejaeger.

“A most remarkable correspondence was started, in which the Oblates first denied to know anything about the reasons of Father Eric’s sudden return from Canada and later acknowledged that they had been informed in detail about the conviction and the reasons for the conviction,” De Coninck wrote.

Following De Coninck’s revelations, Interpol, on Sept. 14, issued a new warrant for his arrest. On Sept. 13, the Reuters news agency reported the possibility of extradition proceedings between Belgium and Canada

On Sept. 15, an embarrassed Belgian government issued a statement saying Dejaeger lost his Belgian citizenship some time after he became a Canadian citizen in 1977.

As for Dejaeger’s sexual activities with Inuit children in Baker Lake, they are well documented in court records.

On April 20, 1990, in sentencing Dejaeger to five years in prison for convictions on nine sex charges involving children, Justice Ted Richard of the Northwest Territories Supreme Court found that, in his opinion, Dejaeger, notwithstanding his activities with children, is not a pedophile.

“From the facts that were provided to the court today, in my view, this is simply a case of a lonely man who had normal sexual urges, which he repressed for many years because of his calling no doubt and who satisfied those sexual urges, not by approaching adults who were old enough or mature enough to say no to him, but by befriending or seducing young children who did not know enough, or were not courageous enough, to say no to him,” Richard said in his decision.

One of Dejaeger’s victims was a boy with whom Dejaeger maintained a sexual relationship for a period of between five and seven years.

“This sexual activity took place at the mission residence here in Baker Lake, and in other homes in Baker Lake where Father Dejaeger was housesitting from time to time, and also in a number of places in Europe when Father Dejaeger took a trip to Europe and took the young boy with him,” Richard noted.

This story was researched with assistance from a source in Belgium close to Godelieve Halsberghe’s investigation. We also thank Sanders Dankelman for his help in translating a Flemish news article into English.