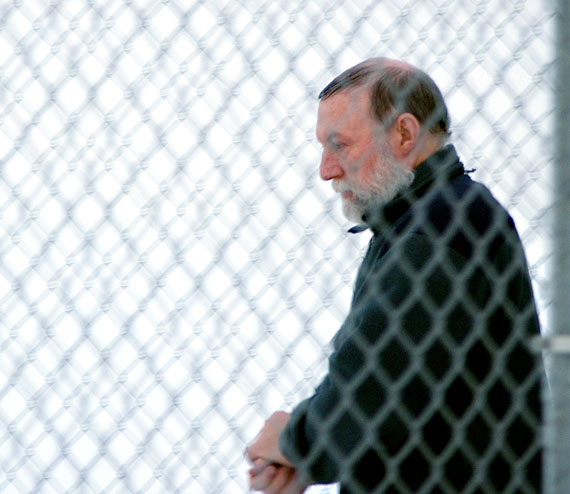 The former Nunavut missionary, Eric DeJaeger, leaves an Iqaluit courtroom Jan. 20 after his first appearance on six child sexual abuse charges in Igloolik dating back to incidents alleged to have occurred in 1970s and early 1980s. DeJaeger arrived in Iqaluit after Belgian authorities expelled him from the country over immigration violations. (PHOTO BY CHRIS WINDEYER)

Fugitive priest Eric Dejaeger returned to Nunavut to face justice Jan. 20 for the first time since fleeing prosecution for child sex charges in 1995.

Dejaeger faces six child sexual abuse charges dating back to his time as an Oblate missionary in Igloolik in the late 1970s and early 1980s.

Dejaeger appeared before a Justice of the Peace in an Iqaluit courtroom reluctantly, initially refusing to leave cells at the Iqaluit courthouse.

“He doesn’t wish to be brought up right now,” said Mandy Sammurtok, the legal aid lawyer assigned to represent Dejaeger at the hearing.

But Crown prosecutor Paul Bychok objected, saying it was not up to Dejaeger to decide whether to appear in court.

“We’re dealing with an indictable offence and he is expected in the courtroom,” Bychok said.

After a short delay, a haggard-looking Dejaeger entered the courtroom wearing blue jeans and a checked shirt. He was not wearing a belt or shoes.

Sammurtok also sought an order to have DeJaeger put into protective custody.

Justice of the Peace Bill Riddell said he didn’t have the power to issue such an order, but recommended the priest be given police protection.

It wasn’t clear if Dejaeger was to be held in remand at Baffin Correctional Centre or the Iqaluit RCMP detachment.

The case falls under publication bans prohibiting the publication of evidence from the upcoming bail hearing and information that would identify any of DeJaeger’s four alleged victims from Igloolik.

Bychok said the Crown will oppose Dejaeger’s release on bail, adding the Crown will need several weeks to prepare its case for a show-cause hearing to “check background information” in Canada and Belgium.

Dejaeger was ejected from Belgium Jan. 19 because he’d been living there without a visa since 1997.

Dejaeger was born in Belgium but took Canadian citizenship in 1977. Belgian authorities said DeJaeger never informed them of his change in citizenship.

He’s been wanted by Interpol since 2001. Most recently, he lived in a residence for Flemish priests near Blanden, Belgium.

(Comments on this story are closed)