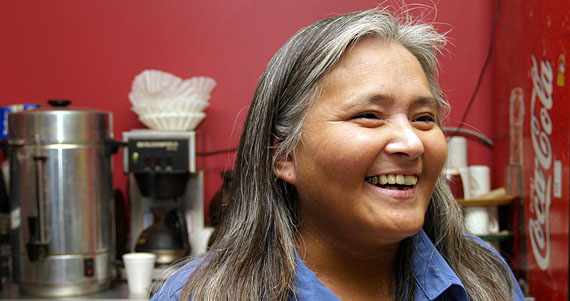 Elisapee Sheutiapik talks to reporters shortly after being re-elected as Iqaluit’s mayor in October, 2009. Sheutiapik announced her return to politics this past week, saying she plans to run for the Iqaluit West seat vacated earlier this month by federal Liberal candidate Paul Okalik. (FILE PHOTO)

Elisapee Sheutiapik’s time away from politics is coming to an end sooner rather than later.

The former Iqaluit mayor announced this week she’ll take a second crack at the Iqaluit West seat when a by-election is held to replace Paul Okalik, who resigned earlier this month to run for the Liberals in the federal election.

Sheutiapik served as Iqaluit’s mayor from 2003 until November, 2010, when she abruptly resigned to spend more time with her family, especially her son Iola, who’s attending hockey school in Cornwall, Ontario.

She said she started getting calls the day after Okalik resigned as MLA, urging her to run.

With Iola heading into his second year down south, Sheutiapik said she was able to consider a return to politics.

“It was never meant to be totally permanent, it was to take a step back,” Sheutiapik said.

Sheutiapik would appear to be a formidable candidate.

In 2008, she came within 44 votes of beating Okalik in Iqaluit West during the last territorial election, in a bitter battle that resulted in accusations that ineligible voters cast ballots.

The RCMP said its investigation revealed some ineligible voters did vote, but couldn’t tell if that happened deliberately or by accident.

Asked if announcing her candidacy this early was a bid to make other potential candidates think twice about jumping in, Sheutiapik said she is just providing an answer to people asking if she’s running.

“Now people know. That question won’t be out there,” she said.

John Quirke, clerk of the Legislative Assembly said the Iqaluit West by-election will take place Sept. 12, the same day as a by-election in Pangnitung.

That by-election is being held to replace Adamee Komoartok, who stepped down after being charged with assault and then suspended from the Legislative Assembly.