“It doesn’t show any signs of abating” 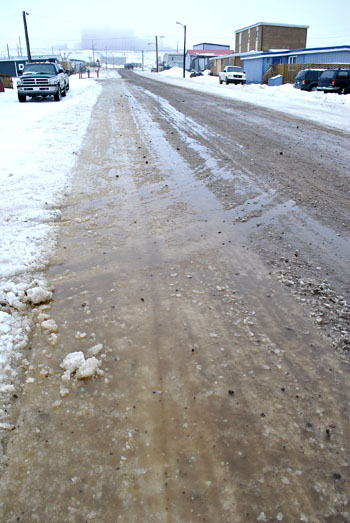 A bag of ice cubes left on New Year’s Eve near an Iqaluit apartment’s front door was melting Jan. 4, as temperatures around South Baffin reached record highs as much as 20 degrees above normal.

“The normal around this time of year is around -22C,” she said. “So yeah, you’re way above normal.”

Bilan-Wallace said Environment Canada is still issuing marine forecasts for the Hudson Strait because temperatures in the area have been so warm.

Normally, such forecasts would end in November or December.

She said Nunavut’s unusually mild winter is connected to an especially cold winter plaguing parts of Western Europe, which British newspapers have dubbed “Arctic” even though temperatures there dipped to only —13 C at their coldest and more generally hovered around the freezing mark.

Bilan-Wallace said warm air and storms that normally head east past Atlantic Canada and on toward Europe are instead turning North and heading toward Baffin Island.

“It started in November… and it’s continued through the early part of this winter now and it doesn’t show any signs of abating,” she said.

They also meant headaches for city staff trying to keep Iqaluit’s roads passable. The City of Iqaluit shut down non-emergency operations for the morning of Jan. 4.

In a noon-hour Twitter message Jan. 4, Iqaluit Mayor Madeleine Redfern said the city was urging drivers to stay off the road if possible.

Arif Sayani, the city’s acting director of public works, said the weather “introduced a lot of water onto the roads” making it difficult to keep them sanded. The morning shutdown gave city crews time to get that job done, he said.

The roads were so bad because rain covered the previous day’s sand, then froze, so crews had to chip ice away with a grader before applying more sand to the roads.

One of two sand trucks even slid off the road. It was back on the road soon after, Sayani added.

If the shutdown seemed unusual, Sayani said that’s because the city policy governing storms is geared towards blizzards, which are usually what causes poor road conditions this time of year.

“What happened today was pretty unique,” he said. “We have guys in road crews who have been here for years and it’s new to them.”

Forecasts Jan. 4 called for temperatures to drop to around —10 C by the weekend.

Environment Canada’s Bilan-Wallace said the rest of the winter in South Baffin should be colder, though still above normal.