With good base in Inuttitut, students do better 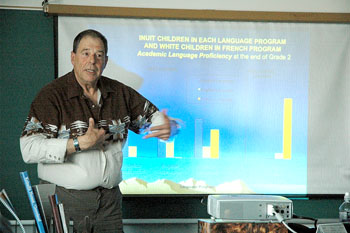 KANGIQSUJUAQ – Long-term studies of school children in Nunavik show that students learn best and benefit from higher self-esteem when taught in their mother tongue.

The findings mean Inuit students with a good base in Inuttitut tend to do better in their studies, says McGill psychology professor Don Taylor.

Taylor also found that Inuit kindergarten students taught in Inuttitut almost doubled their personal self-esteem by the end of the year, compared to a slight drop if they were educated in English or French.

The collective self-esteem among Inuit schoolchildren was also found to be higher when students were educated in their mother tongue, rather than a second language.

These findings aren’t new — Taylor has been conducting research in Nunavik schools since the early 1980s— but they continue to play out in his continuing look at bilingual education.

Taylor has visited Kangiqsujuaq regularly for the last decade or so, since the community’s Arsaniq school decided to expand Inuttitut as the sole language of instruction to Grade 3.

Kangiqsujuaq was the first community in the region to do this, and the Kativik School Board wanted to know what the impact was on students’ learning and self-esteem, then, and as the school made the move to English- or French-language instruction in Grade 4.

“There’s no question that having an extra year of Inuttitut improves their language skills,” Taylor said. “It provides a more solid base.”

When students transition into English or French studies in Grade 4, the first year is difficult, Taylor said.

And it’s how well those students do initially in their heritage tongue that will determine how well they succeed in a second language.

“Children who are good in Inuttitut are the best in English or French later on,” Taylor said. “It really helps them.”

These are not the results of speculation. They’re based on the testing and re-testing of Nunavimmiut students for many years, Taylor said.

The results seem to suggest that simply increasing Inuttitut instruction will improve student performance across Nunavik, but that’s easier said than done.

It would pose a number of logistical challenges, Taylor said, such as finding teaching material and qualified educators.

It also raises the question of whether Inuttitut can also be used to teach abstract concepts in subjects like secondary math and science.

“From a policy perspective, the school board envisaged adding Inuttitut, and it has,” Taylor said. “But it still raises a lot of questions.”

Mary Aitchison, assistant director at the KSB, said the board continues to strive for more heritage language instruction while it monitors student development.

The proof, she said in an interview, is seen in students’ progress.

After more than 30 years, Aitchison said she believes the KSB is living up to its goal of producing students who are fluent in Inuttitut and proficient in a second language, either English or French.

“In the early years, Inuttitut wasn’t taught in every community,” she said. “Now our objective is for students to master the language.

“And we’re obtaining that,” she added. “I’ve seen tremendous development… in envisioning how Inuttitut should be taught, not just as a language, but through a language.”

When asked, Taylor said the vast majority of Inuit parents say they want their children to have a strong base in the Inuit language and culture coupled with the skills to succeed in the modern world.

But do cultural and modern successes cancel the other out?

“I think we can enjoy both,” Aitchison said.

Although Inuttitut is one of the strongest of Canada’s many aboriginal languages, it is still fragile.

“It’s obvious that if you don’t instruct in the first language, it will disappear,” Aitchison said. “And then, you lose so much more.”