The answer my friend, is throw it to the wind 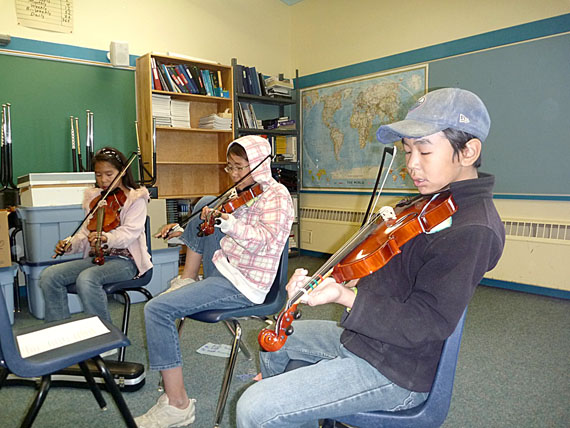 There was no fiddling around in this classroom last summer, where participants learned how to play traditional Celtic folk songs. (PHOTO BY MAREN VSETULA)

Call it blues music for kids: a group of guitar students eight years old and up, singing about the wrongs of homework and the cost of junk food.

The majority of them started their week having never sung a note or picked up an instrument, but by the end, this arts and music camp was churning out true performers.

The community of Igloolik will be holding its second arts and music camp during winter break this year, following the lead of camps previously held in Iqaluit and Pangnirtung.

Andrew Morrison, a music camp alumnus and now a project coordinator, says the camp was the “catalyst” for picking up the guitar.

Now, he hopes to spark an interest in other youth.

“We have so much fun,” said Morrison, 24, of past camps. “When you learn a musical instrument or an artistic skill, there’s a tangible reward.

“There’s a real sense of pride when students learn their favourite AC/DC song or learn to throat-sing like their grandmother did.”

This year’s camp welcomes school-age youth from eight years and up, says Morrison – although they often open up the evenings to young adults and sometimes elders.

Participants pick two of four workshops, although the entire group gathers at least once a day to share experiences.

The end of the camp is celebrated though a public performance when the community is invited to see the students’ progress.

“The community concert is one of the most important parts of the camp,” Morrison said. “These young people work really hard and there’s a lot of confidence that can be built from applause.”

The camp also offers young people another way to express themselves, Morrison said – hence the homework blues and other “hilarious concoctions” that his students come up with.

“For me, in my life, music has helped me through some of the most joyous and most difficult times,” he said, “and I hope I can pass that on.”

Igloolik’s arts and music camp is has about 50 spaces open for its afternoon workshops, to be held at Ataguttaaluk school.

Those interested in participating can pick up a form at the school or call Maren Vsetula at the community’s recreation office at (867) 934-8008.

Nijjausijarnirmik Ilinniarniq is sponsored by Brighter Futures, First Air, the hamlet of Igloolik and the local school.