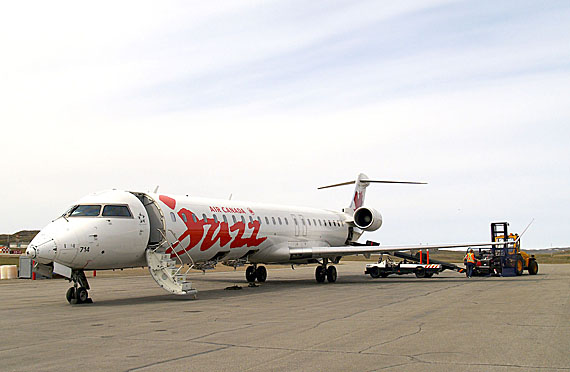 Crews unload baggage from an Air Canada Jazz CRJ 705 parked on the apron of the Iqaluit airport July 6. The route, which prompted fears of doom for northern airlines, hasn’t caused as much havoc as anticipated. (PHOTO BY CHRIS WINDEYER)

When Air Canada Jazz started daily flights between Montreal and Iqaluit this past March, northern airlines and Nunavut politicians reacted with howls of outrage.

One MLA, South Baffin’s Fred Schell, went so far as to call Air Canada Jazz “a dangerous and unwelcome predator” and called on the Government of Nunavut to ban its employees from travelling on the airline.

There was much wringing of hands that a third airline, with deep pockets, would undercut the two northern airlines on Nunavut’s busiest route.

Then, the theory went, without the profits from the Ottawa route, Canadian North and First Air would be unable to continue operating the less-travelled routes to smaller communities.

But three months into Air Canada Jazz’s Nunavut experiment, all may not be going so well for Canada’s largest regional carrier. (Air Canada Jazz and Air Canada are technically different companies, with Jazz acting essentially as a contract airline serving smaller Canadian markets.)

Fares for the Montreal-Iqaluit run, which includes a morning stop in Ottawa, are much the same on Jazz as on the other two airlines. There have several flights cancelled for mechanical reasons and passengers on Jazz report mostly-empty planes.

Iqaluit resident Jaime Perry recently travelled to and from Ottawa on Jazz and said she chose the Jazz flight because she got a good price, and liked features like the automated check-in at the Ottawa airport and the in-flight televisions provided for each passenger.

But she said she noted a lot of empty seats on the flight south.

“I’d say maybe a third of the plane was full and I wondered if they were even making money flying back and forth,” Perry said, though she added the flight home had far more passengers.

For Perry, the empty seats meant extra room and attention from the flight attendants.

But for airlines, flying with empty seats costs money. Isabelle Arthur, a spokeswoman for Air Canada, which responds to queries about the business side of Jazz flights, wouldn’t go into specifics about how full the Iqaluit flights are, saying that’s information the airline prefers to keep from its competitors.

She added that Air Canada is doing no special promotions for the route, the airline is promoting Iqaluit to “the travel agent community.”

There have also been a few cancelled flights due to mechanical reasons, which fuelled speculation that Jazz was scrubbing mostly-empty flights to fly fuller planes.

Jazz Air spokeswoman Teri Lake said Jazz has had a 95-per cent “completion rate” since the route started.

“We don’t do commercial cancellations,” she said.

Meanwhile, competition from both Air Canada Jazz and Calgary-based Westjet forced First Air to slash the number of flights on its route between Yellowknife and Edmonton from 16 per week to six.

Neither First Air nor Canadian North responded to requests for interviews for this story.