“We know that we have a significant obligation to the Inuit” 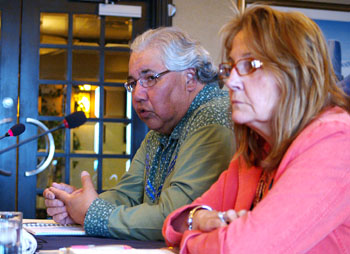 Murray Sinclair, chair of the Truth and Reconciliation Commission, left, speaks to delegates at the Inuit Tapiriit Kanatami general meeting in Iqaluit June 24, as commissioner Marie Wilson looks on. Sinclair promised a distinct Inuit story would be part of the commission’s work. (PHOTO BY CHRIS WINDEYER)

The Truth and Reconciliation Commission looking into abuse at residential schools will make sure a distinct Inuit story is told, the commission’s chair pledged June 24.

Speaking to the annual meeting of Inuit Tapiriit Kanatami in Iqaluit, Justice Murray Sinclair said the TRC will give every one of Canada’s 150,000 residential school survivors the chance to contribute to the commission’s record.

“We know that we have a significant obligation to the Inuit and to ensure that Inuit stories are told,” Sinclair said.

The TRC’s visit comes on the heels of its first “national event” in Winnipeg, where survivors of residential schools shared experiences with one another.

A similar, though informal, event was held June 24 at Iqaluit’s Anglican parish hall.

The Winnipeg gathering was the first of seven to be held across the country over the next five years. The only national event to be held North of 60 will happen in Inuvik next June.

But commissioners were adamant that Nunavut communities will get a chance to host their own events.

Holding the national event in Inuvik “absolutely does not mean we’re not going to do anything else in North,” commissioner Marie Wilson said.

“We know perfectly well that one event in the North is not going to do it.”

Sinclair also said the commission is going to try to offer travel assistance for people who want to travel to Inuvik.

However, the scheduled but controversial end of funding from the Aboriginal Healing Foundation means it’s not clear how much money the commission will have to bring people in.

Sinclair said the commission is working on a travel fund, which already has a $35,000 from churches.

ITK president Mary Simon and other ITK delegates said TRC events need to start happening in the North as soon as possible, because too many elders have already died waiting for a chance to tell their stories to the commission.

“People have died waiting for this to happen,” she said.

Sinclair said that while the TRC has no authority over compensation payments, he’s concerned that about 25 per cent of claims from northerners are being rejected.

“That’s something that may end up back in front of the judges who are administering the settlement agreement,” he said.

Sinclair, along with fellow commissioners Wilson and Wilton Littlechild, came to Iqaluit at the invitation of ITK. They also introduced members of the Inuit subcommission, including co-chair Robbie Watt and cultural advisor Peter Irniq.

Sinclair promised the commissioners will return to Nunavut for more events.