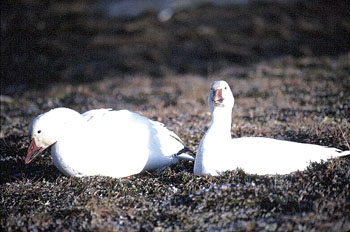 Winner: Snow geese numbers are up by seven per cent, but the populations of some other migratory birds and seabirds have plumetted, a new evaluation of Arctic species finds. (FILE PHOTO) 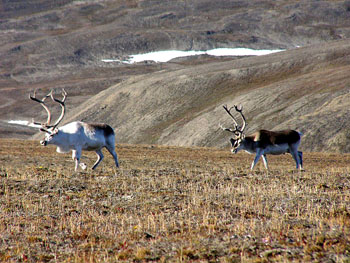 Loser: Peary caribou rank among the animals in the High Arctic whose numbers are suffering, likely due to changing conditions in the higher latitudes. (FILE PHOTO)

Climate change appears to be producing winners and losers among the birds, land and sea animals, and fish that breed or live year-round in the Arctic, says a new study that looked at their abundance over a 34-year period.

Species from the southern areas of the Arctic are doing relatively well, but many in the High Arctic region are in decline, according to “The Arctic Species Trend Index,” released March 17.

Among the biggest winners are ducks, geese and swans, bowhead whales, white-tailed eagles ,and the Atlantic puffin, whose population numbers are up.

The biggest losers include Greenland’s Atlantic cod, lemmings, the brown bear, and polar bears in the Western Hudson Bay.

The overall abundance of wildlife in the southern areas of the Arctic is mainly due to the “strong increase of goose populations,” says the study, which looked at 306 species and nearly 1,000 populations over a period of 34 years.

The study found the abundance of High Arctic species declined 26 per cent over the same period.

The variations may be due to responses to climatic changes, suggests the study, which mean species with more southerly distributions move north, “while the northernmost typical High Arctic species have nowhere to move to.”

The complete report produced by the Circumpolar Biodiversity Monitoring Program with money from Canada can be consulted at http://www.asti.is/images/stories/asti%20report.pdf