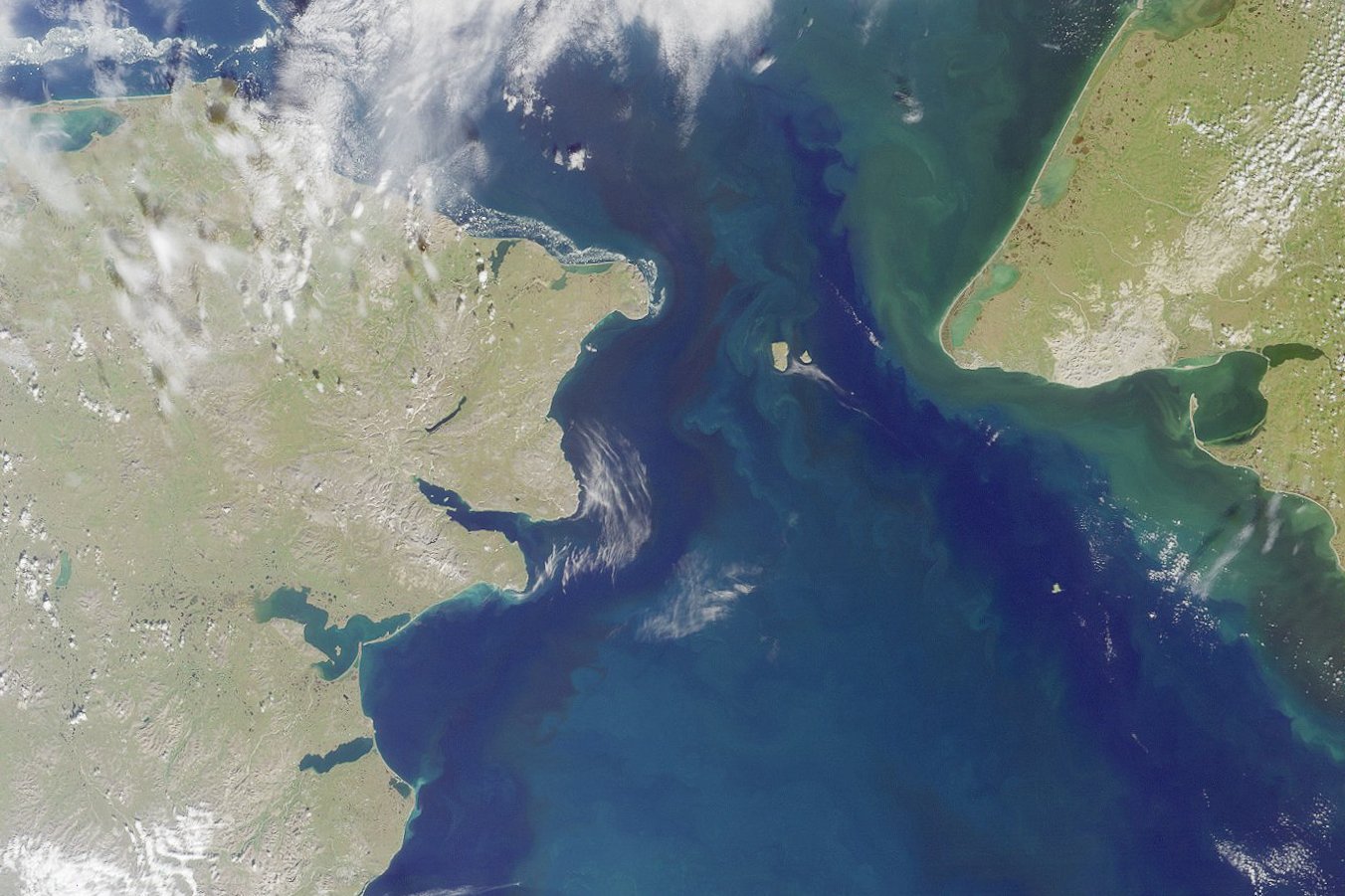 An undated satellite image shows the Bering Strait, with Chukotka, in Russia, on the left, and Alaska, in the United States, on the right. (Image courtesy of NASA)

As Russia’s military builds up its presence along the border with Ukraine, any incursion there could have significant ripple effects in the Arctic, several experts and observers told ArcticToday.

That could range from degraded diplomatic relations between Russia and the West on Arctic issues, to more military activity in the region — and with it the greater risk of unintentional escalation. 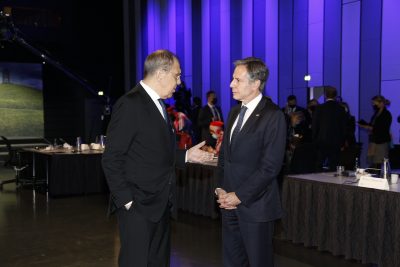 “Any type of deterioration in relations will most likely also have an Arctic component,” said Andreas Østhagen, a senior research fellow at Norway’s Fridtjof Nansen Institute and the Washington-based Arctic Institute. “It might just have an Arctic component in the fact that security dialogue with Russia in the North becomes increasingly difficult.”

If Russia invades Ukraine, “it’s the end of the Cold War settlement,” said William Pomeranz, acting director of the Wilson Center’s Kennan Institute. In that case, “everything will be on the table, from Russia’s perspective.”

Russia’s actions also underscore the threat of its military buildup in the Arctic. While conflict originating in the Arctic itself seems unlikely, the escalation of tensions elsewhere could spill over into the region.

The tension in Ukraine is also “a reminder to us that we better be on the alert everywhere,” Senator Lisa Murkowski, a Republican from Alaska, told ArcticToday last week — going so far as to suggest the possibility of Russian military activity in the Bering Strait, near Alaska.

Russia announced on Thursday its intention to hold massive military drills with all of its fleets in the Arctic, Atlantic, Pacific, and Mediterranean in January and February, involving “more than 140 warships and support vessels, more than 60 aircraft, 1,000 pieces of military equipment, and about 10,000 servicemen,” according defense ministry statements.

And if Russia invades Ukraine, Østhagen said, it’s “highly likely” the country would do a military exercise in the Barents region — either to draw attention away from the conflict or to ensure its Northern Fleet maintains vital access to European ports.

If Russia attacks Ukraine, “all forms of contact with Russia will be stressed to the maximum,” Pomeranz said, including relations in the Arctic.

“I don’t think you can fence off the Arctic in a global crisis between Russia and the United States,” he said. “If they indeed invade, then there is no way back. And diplomacy becomes much harder.”

In 2014, when Russia annexed Crimea, high-level military dialogue with the country was halted. Those effects are still being felt, Østhagen said, with security dialogue in the North remaining difficult.

“There’s no formalized forum, there’s no setup any more, where security concerns in the North can be discussed with Russia,” Østhagen said. There have been moves to restart or recreate such communication channels. “But naturally, that’s going to be more difficult to do, given the current circumstances with Russia.”

These actions make it more difficult for Russia to maintain political contacts and diplomacy, and it is also makes it difficult for Western states, including those in the Arctic, to maintain ties to Moscow, he said.

“It’s put another log on the fire of animosity between the West and Russia,” Østhagen said.

“What’s different is that when Crimea was annexed in 2014, I think that took a lot of people by surprise,” he added. “Now today, in the start of this year, I think the Western states are much more prepared” — in part because they have been “watching Russian expansionist behavior” for the past eight years — and they are showing a willingness to hinder this invasion before something happens, he said.

“It’s different because we are promising, from the beginning, tough sanctions and no negotiations — especially on the right of Ukraine to consider to be an applicant for NATO membership,” Pomeranz said.

Can Putin back down?

“A turning point will be when the United States issues its response to the Russians’ demands and invariably they fall short of what the Russians want,” Pomeranz said. “Because then the Russians will either have to do something to change the tenor of the negotiations, or they will have to back down — and I don’t think Putin wants to back down.”

If Russia chooses to escalate, there are a few potential targets. They could conduct a smaller strike to take control over the Azov Sea, or an all-out invasion or an attack on a border city such as Kharkiv. Or Russia could recognize Donbas and Luhansk as independent countries.

“And that is what Putin is testing right now,” Pomeranz said. “He’s testing us as to what will be the response — not only at the negotiating table, but if this escalates as well or if he feels compelled to escalate.”

Such actions would likely bring economic sanctions that would deal a devastating blow to Russia’s economy, in addition to the loss of lives on all sides of the conflict.

Yet “Putin is not prone to retreating. He is clearly a risk taker,” Pomeranz said. “And unlike 30 years ago, or even 20 years ago, or 10 years ago, Putin is dictating the tempo of this crisis.”

Putin may see this as his time to act — the strongest hand he will be dealt in his quest to bring back Russia as a global power.

Europe, which is experiencing an energy crisis with unusually high prices, would likely be unwilling to sanction Russia’s energy sector, Østhagen said. But if Russia were to press into Ukraine, Europe would be forced to respond “forcefully” with sanctions against individuals and the banking sector, for instance.

Putin “is absolutely in a position where he feels he needs to do this,” said Troy Bouffard, director of the Center of Arctic Security and Resilience at the University of Alaska Fairbanks. “He has shifted from a deterrence to a compellence strategy. And he’s creating the leverage he needs to effect change.”

However, the negotiations by the U.S. Secretary of State Antony Blinken and his Russian counterpart Sergey Lavrov on Friday indicate that Russia is still at the negotiating table, Bouffard believes: “They’re very interested in doing that through diplomacy.” A willingness to work through diplomatic channels makes Arctic repercussions unlikely, he said.

“After the 15-hour meeting, it was clear they both walked away with a better understanding of each other and both readily admit that. The language that’s following this meeting is back to normal,” Bouffard said. “Clearly there are going to be more discussions in route to an agreement and de-escalation.”

Such negotiations would last for several rounds, he said. “Right now, I think that the advantage is clearly to Russia to drag this out and to push more and more and more to get closer to what they ultimately want.”

Russia may wait until the end of negotiations to conduct some limited incursions into Ukraine to “really ratchet up the pressure to push the West or United States into a final compromise,” Bouffard said.

Such diplomatic wrangling along with the possibility of conflict is a “big conundrum” for the Arctic Council and its member states, Østhagen said. Russia is in the midst of its two-year term chairing the council.

Scaling back diplomatic conversations in the North would be counterproductive, Østhagen said.

“I’m not sure that this approach of cutting diplomatic contact when things are bad is really a useful approach to international conflict management,” Østhagen said. “There’s mutual benefits from operating with Russia — in fisheries management, in search and rescue, in cross-border management regimes.”

These benefits are particularly apparent in the Arctic because of its unusual environment, especially in regard to the benefits and challenges created by climate change, Østhagen said.

‘You don’t even have to fire a shot’

Some observers worry that Russia could take action elsewhere along its massive borders — including in the Arctic.

“Our neighbors on the Russian side are stepping up all level of activity, with either new runways or renovated or dusted-off military installations,” Murkowski said. “There is a level of buildup that we can see — this is not speculation.”

Russia argues that they are preparing for the changing Arctic environment that is less hemmed in by sea ice, Murkowski said. “They’re saying, ‘We’re going to be prepared.’ The United States needs to be doing the same.”

The U.S. should adopt a mindset of peace and stability in the region, but with strong deterrence efforts, she said.

“Our diplomatic engagement goes a long way,” Murkowski said. “But at the same time that we work to advance our diplomacy at all levels, I think we need to prepare ourselves for whatever may come our way.”

Bouffard agreed. “It’s smart just to have that kind of awareness” that Russia’s military is more modernized and capable of projecting power on multiple fronts, he said. “They have things to prove to the world and they want people to understand that it is a power player.”

Russia dominates in the Arctic, Bouffard said. “There’s no other place on the Earth they can say that.” And the “the sheer amount of capabilities and presence that Russia has in the Arctic — it is very concerning,” he added.

“Because, as you can see in Ukraine, you don’t even have to fire a shot to make the whole damn world squirm.”

While Russia has been more willing in recent years to organize exercises and have a presence in the North Pacific, the majority of both Russia’s population and its strategic forces are located closer to Europe, Østhagen said.

A larger concern for the U.S. Arctic could be crumbling cooperation on regional issues because of spillover from tensions elsewhere, he said.

There have been efforts in Alaska, from the U.S. Coast Guard and others, to develop or re-establish good relations across the Bering Sea, especially in terms of illegal fisheries. “This makes the job of those who are in favor of more dialogue on a regional level — this makes it all more difficult,” Østhagen said.

Between limited communication with Russia’s military leaders and the buildup of Arctic capabilities, there is the risk of the possibility of unintentional escalation, experts have said.

The potential for deadly miscommunication weighs on Murkowski’s mind.

“Because when tensions are heightened, it’s just easier to do something that may be more reactionary,” she said. “And that’s something that we just must guard against.”

And for all of the tension with Ukraine, the U.S. and Russia still work together on efforts such as search-and-rescue operations.

“There are areas where we can work cooperatively, even while our presidents may be at odds or capitols may be at odds,” Murkowski said. “It takes work, and sometimes those tensions are much, much, much more strained — and I think we’re certainly living that right now.”