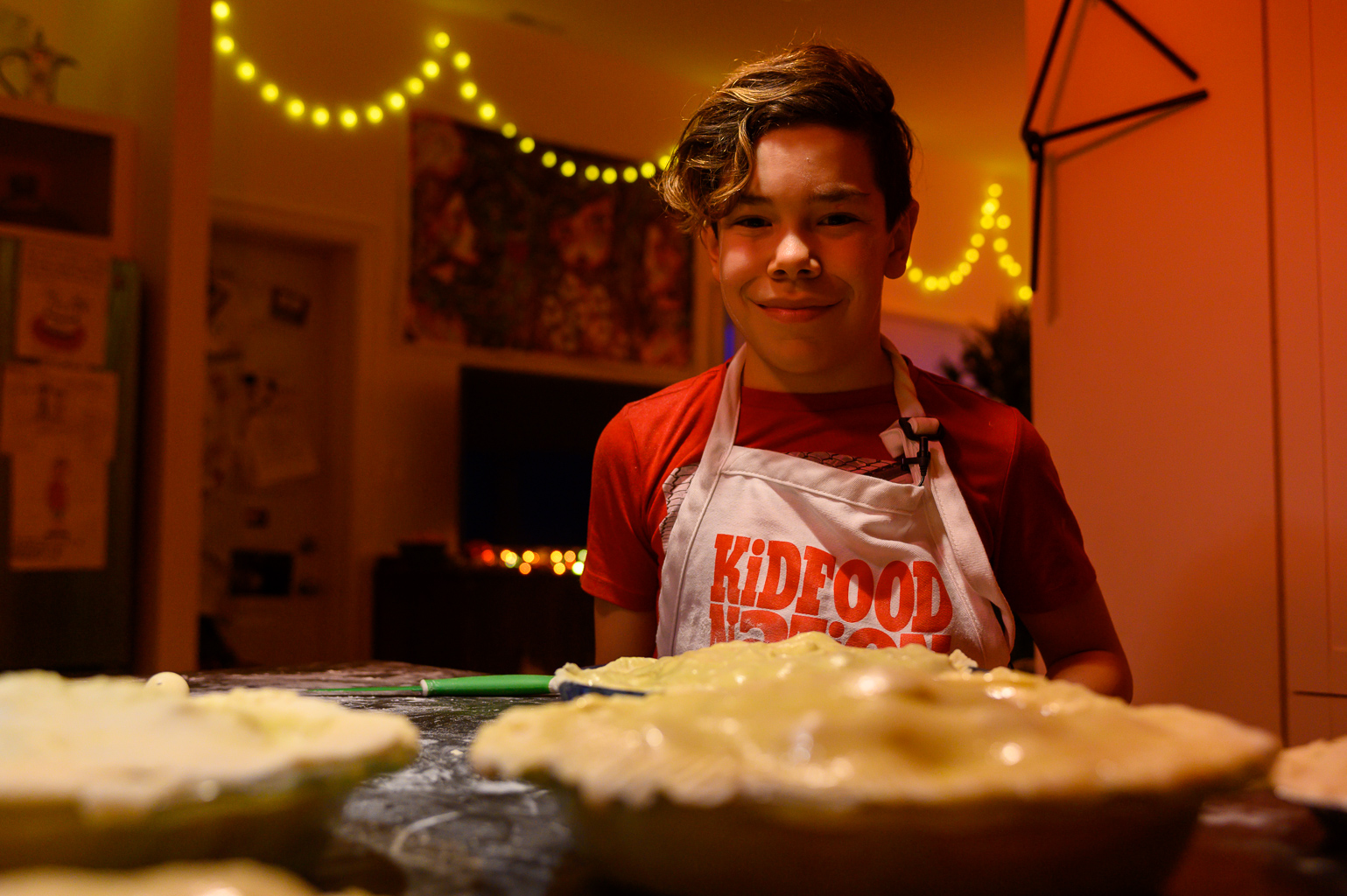 River McCluskey, 11, stands over several of his award-winning tourtières. (Photo by Dustin Patar)

On a dark, snowy December afternoon, 11-year-old River McCluskey and his mom Kerry rolled out dough under the watchful gaze of a muskox skull perched high on a kitchen shelf in their home in Apex, outside Iqaluit.

By the end of the afternoon, the rolled dough will find its way into pie tins, loaded with meat, topped with more dough and then frozen.

“This is one of our Christmas traditions,” said Kerry.

“We make all of these tourtières and deliver them around to our neighbours, our family, which is a lovely thing to do. We deliver them on Christmas Eve and the goal is to try and do it by snowmobile, but last year was minus 50 on Christmas Eve, so we drove around in our heated truck.”

For the last five years, a similar scene has unfolded in the McCluskey kitchen, always in the weeks leading up to Christmas.

“This is a recipe that we’ve been working on for River’s entire life,” said Kerry, looking on as River carefully spoons a beef, pork and herb mixture from a large steel pot into one of many pie shells they’ve already prepared.

“There’s fresh sage, parsley and thyme; and for a while, we were cooking it directly into the meat, but I found that if we cook the meat and then added the fresh herbs after, it just was so much more fragrant.”

Over the years Kerry hasn’t been the only one to make changes to the recipe. Two years ago it was River who suggested they use muskox instead of just the traditional pork.

It was that recipe that earned him a spot among 25 other winners of the Kid Food Nation contest in Toronto earlier this year, his second such award in just as many years.

The contest, now in its third year, asks young chefs between the ages of seven and 13 to send healthy and original recipes that highlight their culture or Canadian pride.

Last year his winning recipe was for baked Arctic char with citrus relish, an idea that stemmed, in part, from a dish he had while on vacation in Cuba.

“We went to Cuba when I was six years old, and there was this restaurant on the beach, and they had like really delicious hot dogs and like burgers and stuff, and then you could add this relish to it that was so good.”

It was so good, in fact, that Kerry recalls conversations about the relish for a year, until one day River decided to try and replicate it.

“He worked on it for the entire weekend and came up with this amazing citrus relish,” said Kerry.

“It was just the most delicious thing and that was a real turning point, because that’s the first time he created his own recipe.”

When asked what he wants to be when he grows up, River wasted no time in responding, “a chef,” then quickly added, “or a pilot.”

“It just looks fun to be a pilot and fly a plane,” he said as he carefully carved the letter “R” into the dough topping one of the meat pies.

Unlike the previous couple of years, these tourtieres deviated a bit from the recipe, because of a shortage of muskox.

And the pies made that afternoon were donated to the Iqaluit Amateur Hockey Association for a bake sale, so they won’t be whisked away to neighbours on Christmas Eve.

But for those neighbours, or anyone else, who may be craving one of the award-winning pies, the muskox tourtière recipe can be found on the Kid Food Nation website.