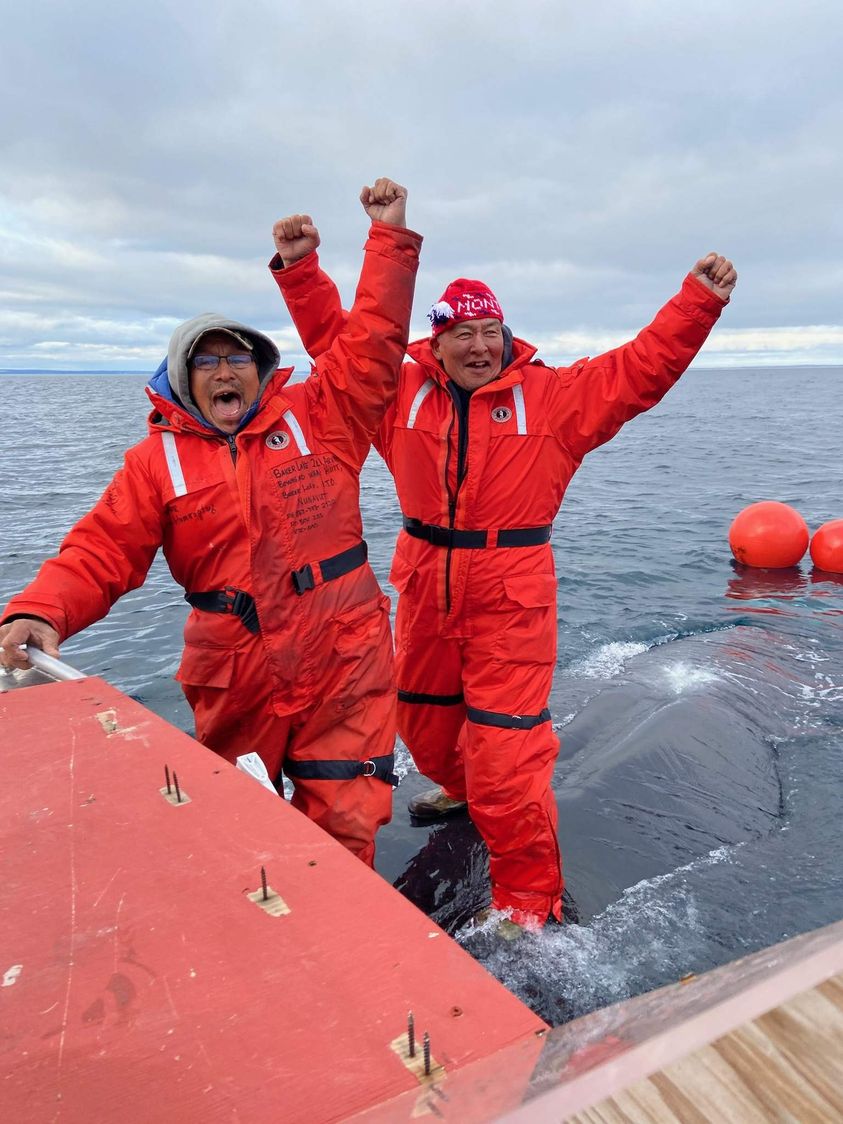 A successful hunt: How Baker Lake hunters got their bowhead

Two days before hunters from Baker Lake caught a 14-metre bowhead whale for their community, they almost gave up.

They had been stationed at Naujaat’s elders cabin for nearly three weeks, a few crew members had left because of personal matters and their hunt was impeded by rainy, stormy weather — morale was low.

“We were just about to prepare [for] home and I talked to the crew,” captain Philip Putumiraqtuq told Nunatsiaq News.

Then, he said to the hunters: “We can try again. We’ll try again before we go home.”

Baker Lake was one of two communities that received a bowhead tag this year, and set out on their hunt July 27 and had a little more than a month to catch one. Coral Harbour was the other, and hunters in that community caught their bowhead whale on July 10.

On Aug. 15 — a Sunday evening — a Naujaat community member spotted a bowhead about eight kilometres off the Harbour Islands, which are in Repulse Bay.

Putumiraqtuq was alerted to the sighting, and checked in with team elder John Avaala because Sunday is traditionally a day of rest. Avaala gave his approval.

“So we started off,” Putumiraqtuq said.

“The rope that we use for the harpoons was strong enough but the aggressive whale had snapped them off,” he said. “We lost it for a while. But luckily there was still one on and it popped up again.” 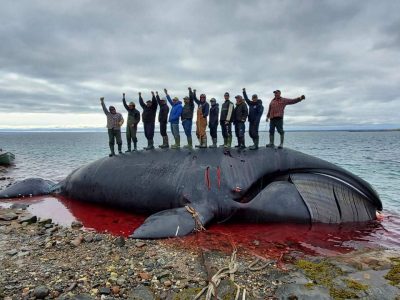 The hunters stand in victory atop the bowhead whale near Naujaat Tuesday. (Photo by Trina Yank)

Three more harpoons and the whale slowed down.

Putumiraqtuq shot it, then called the hunt off because the waters were getting rough and night had approached. They left it until Monday afternoon.

“We figured that it was going to die anyway so we searched the next day and located it not too far from where it was,” he said.

The hunters brought their catch to shore on Tuesday and began harvesting the maktaaq. They shared it with people in Naujaat, and people from that community helped cut up the whale and packaged the rest of the maktaaq for every community in the region.

“The whole town came out and celebrated,” he said. “There were shouts and cheering and a song was sung.”

The bowhead is the only baleen whale that spends its entire life in Arctic waters.

Maktaaq, or whale skin and blubber, is most commonly harvested from bowheads. It’s a good source of vitamins C and D.

Jamie Kataluk is a member of the team, although he had to travel to Rankin Inlet to deal with a personal matter. When talking about the experience, he was overwhelmed.

“The Inuit way of life — people gathering together to achieve one goal. And to see that happening here, it was, it was — sometimes it’s hard to describe,” he said.

“That’s always been a tradition for us people — always sharing whatever we harvest to the point where there’s no more.” 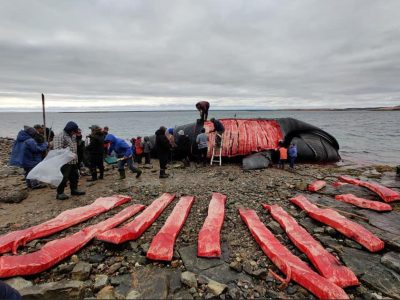 Baker Lake hunters and Naujaat residents begin to carve up the bowhead in large strips Tuesday. (Photo by Catherine Ijjangiaq)

He’s excited to get home to Baker Lake, where the community will welcome back their loved ones. That should happen this weekend, weather permitting.

Back in Baker Lake, Marianne Uqayuittuq watched her loved ones from afar, tracking them through a GPS and sending updates on their locations to the community’s Facebook page.

Her husband, Joe Uqayuittuq, and brother, Casey Tulurialik, took part in the hunt.

She said her great grandfather used to be the captain of whaling ships, hunting bowhead and other marine life.

“He’s looking down and proud of you,” Uqayuittuq wrote to her brother in a Facebook post a few days after he left.

She said everyone in town is excited for the team’s return, and that specifically, she’s excited for her husband’s return.

“I’ll just be happy when he goes back to his regular routine [and] helps out with [the] grandkids, teenager, house work and other responsibilities,” Uqayuittuq said with a laugh.

Online, there’s been talk of a square dance when they return, which Kataluk says is tradition. But Uqayuittuq said she hasn’t heard of any planned celebration yet.