A Ukrainian Christmas in Nunavut

“It’s all about family and friends getting together” 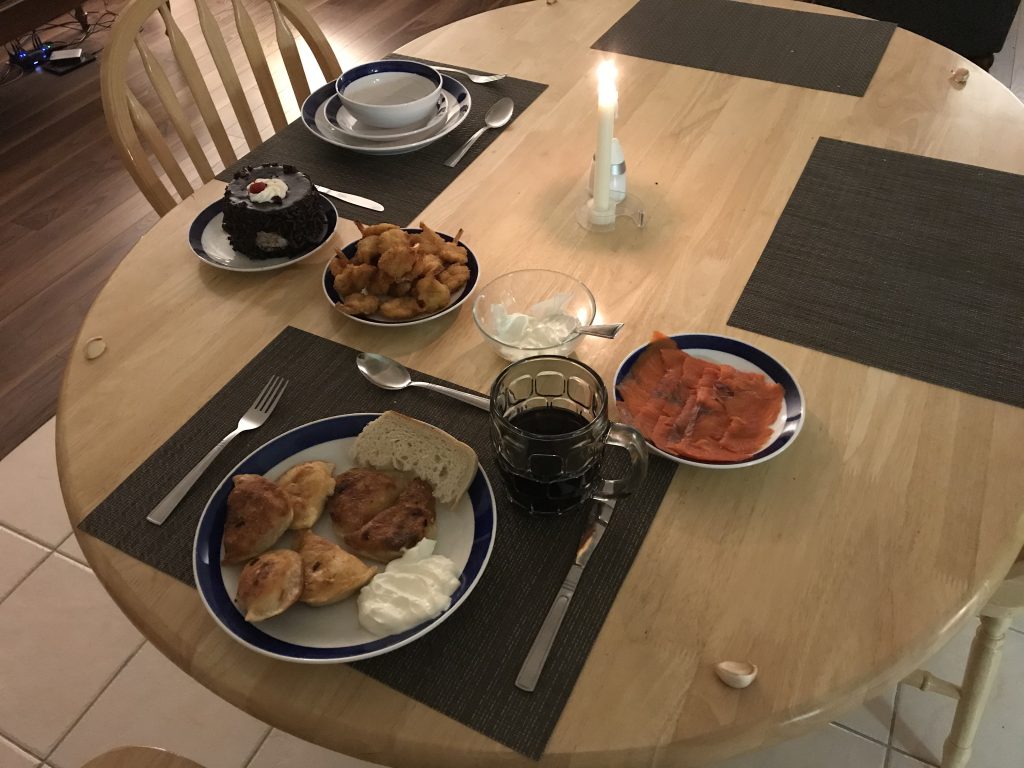 One of the biggest challenges with celebrating Ukrainian Christmas in Nunavut is getting traditional foods, said Roman Dzioba, a resident of Iqaluit. Here, his Christmas Eve meal features a mix of more traditional elements, like the varenyky (perogies) on his plate, and non-traditional dishes such as fried shrimp. Following tradition, Dzioba also placed an additional set of dishes on the table in honour of friends and family who couldn’t join him and cloves of garlic around the table, which are said to ward off evil spirits. (Photo courtesy of Roman Dzioba)

For many, once January rolls around, the holidays have given way to the tackling of resolutions and the struggle to readjust to life that is once again based on knowing which day it is.

But for another group, the first week of the year also brings with it the same holiday many are still recovering from: Christmas.

Faiths that follow the Julian calendar, such as Ukrainian Orthodox and Ukrainian Catholic, celebrate Christmas on the sixth and seventh of January.

“This is because they are respectively December 24 and December 25 under the old Julian calendar, which some Eastern-rite churches use for liturgical purposes,“ said Roman Dzioba, an Iqaluit resident who grew up Ukrainian Catholic.

The Julian calendar, which was originally proposed by Julius Caesar, is 13 days behind the Gregorian calendar that most of the world currently uses.

Dzioba was also quick to point out that alongside those Ukrainians that celebrate Christmas in January, there are also many Russians, Belarusians, Armenians, Ethiopians, Coptic Christians in Egypt and others that celebrate at the same time.

But it’s not just the dates that separate the January iteration of Christmas from its December counterpart. Many of the familiar mainstays of western Christmas, like Santa Claus, trees and the exchange of gifts, aren’t a part of traditional Ukrainian festivities in January.

However, in December those belonging to Eastern Catholic Churches do celebrate Saint Nicholas Day, when gifts are exchanged.

Despite their differences, for Dzioba, the two variants of Christmas do share one striking similarity: “It’s all about family and friends getting together.”

One of the central parts of a Ukrainian Christmas is the feast, which occurs on the night of the sixth and is steeped in traditions like the setting of an extra place at the dinner table for friends or family who weren’t able to be present.

While the traditions call for any number of different observances around the meal, the focal point of Christmas Eve is the food itself.

“Traditionally, there are 12 dishes, and which dishes these actually are varies from place to place and from family to family,” said Dzioba, whose family is originally from western Ukraine.

The 12 dishes, which are traditionally to be meatless and without dairy, are said to represent the 12 apostles.

If Dzioba had to pick a favourite, it would be the first traditional dish of the night, borscht, or beet soup.

But the Christmas variant of this Ukrainian staple is special: it features small, mushroom-stuffed dumplings called vushka, which according to Dzioba means small ears.

“It’s what I looked forward to every year.”

For Dzioba, celebrating Ukrainian Christmas in Nunavut comes with two big challenges: a lack of community and a scarcity of Ukrainian foods. Despite this, Dzioba says it’s not as challenging as celebrating in Australia, which he’s done.

“Christmas there is a summer holiday,” said Dzioba.

“So you’re baking a lot of these carb-rich, heavy meals in what can be 40- or 45-degree weather and it’s just not conducive to do that, but up here it’s so cold it works because it’s more or less the same in Ukraine.“

Ukrainian Christmas also traditionally starts a 12-day period of celebrations that runs through Malanka, Ukrainian New Year’s Eve, and ends with Epiphany on Jan. 19, both of which are also 13 days after the same holidays that are celebrated by western Christian churches.