A test run for disaster 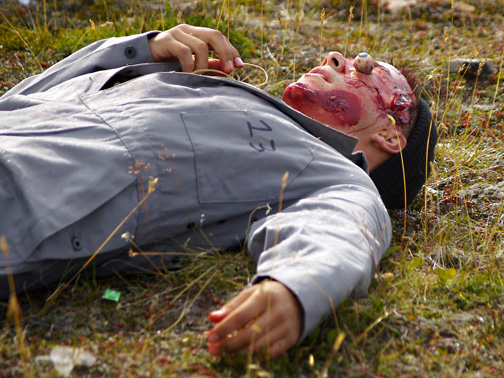 Rifleman Alex Zimin of the Arctic Response Company Group waits for help for his fake eye injury during a mock disaster exercise in Iqaluit Monday. Zimin was playing one of 20 victims in a scenario meant to gauge the city and territory’s ability to respond to an explosion at Iqaluit’s tank farm. (PHOTO BY CHRIS WINDEYER)

Sgt. Bob Garceau puts the finishing touches on a ghastly-looking fake wound; a bloodied stump which is supposed to be all that’s left of a soldier’s arm.

He adds a few more daubs of fake blood to bits of shredded paper towel that become a believable substitute for dangling bits of flesh.

Garceau stands up, admiring his handiwork.

The answer: absolutely disgusting. Working in the hangar of the Forward Operating Location near Iqaluit’s airport Garceau and his team from the 11 Field Ambulance unit from Victoria, BC have put together a gallery of revolting flesh wounds for Operation Nanook’s emergency response exercise.

The soldiers, from the Arctic Response Company Group in Toronto, are playing campers who were nearby when Iqaluit’s tank farm exploded. In addition to the severed arm there are protruding eyeballs and intestines, cuts, burns and shrapnel injuries. People are walking around with pieces of shredded coke cans sticking out of their faces. One soldier, playing a dead victim, is taking his role to heart and is asleep.

“It enhances the training,” Garceau says of the realistic injuries. “People going to Afghanistan see a lot worse that we have here.”

Later, near the tank farm, the crack of four Canadian Ranger rifles signals the explosion of the tank farm and the beginning of the exercise. In this scenario, the tank farm has been blown up by eco-terrorists. Soon, firefighters and paramedics sweep the scene. They do triage, to determine which of the 20 mock victims need urgent medical attention, who can wait for treatment, and who’s dead or dying.

Ed Zebedee, the director of prevention services with the Government of Nunavut, said this exercise is meant to see how well the GN responds to a crippling disaster. With tank farms in every Nunavut community, this is practice for a nightmare scenario.

“The loss of a tank farm could result, depending on the community, in the possible evacuation of a community, a total evacuation,” Zebedee told reporters. “It is one of the higher risks that we see.”

The scenario was also designed to test fire and ambulance response, and Qikiqtani General Hospital’s ability to handle large numbers of casualties. With only two ambulances, paramedics must make multiple trips to the hospital, and Zebedee said the GN agreed to cover the city’s costs for the exercise, since Iqaluit has a limited budget for medical supplies.

The mock disaster also kicks in a territorial disaster response committee, made up of representatives from every GN department, and triggers responses from a myriad of federal agencies. The RCMP’s job is to secure the scene around the “explosion” and investigate its cause. The Canadian Coast Guard, meanwhile, is setting up one of its mobile oil spill cleanup units to contain any fuel that may leak into the bay.

This is good practice for the Mounties, says Steve McVarnock, V Division’s commanding officer, since in most Nunavut communities, RCMP officers would be among the first to respond to a major emergency.

“Normally we would be out here first to work with our community partners to contain or somehow triage a scene like this” and then make arrangements for any help needed from “down South,” McVarnock said.

If confusion reigns, it’s by design, Zebedee insists. Apart from a few “trusted agents” who know how the whole thing will unfold, most participants are left in the dark, Zebedee included, so they’re more likely to respond as they would in a real emergency.

“We want this to be as close to a real scenario as possible,” he said. “If we completely briefed everyone involved, it wouldn’t show us where our problems are.”