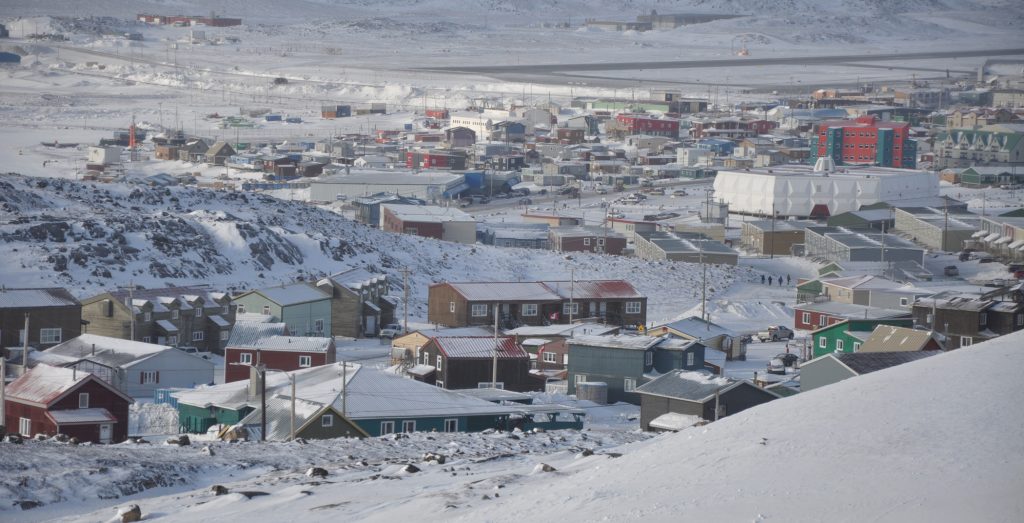 A view of Iqaluit, Nunavut. A door-to-door survey conducted in the city in 2011 found that overcrowded housing was often associated with latent tuberculosis infections. (File photo)

If the Canadian government plans to live up to its promise to eradicate tuberculosis in Inuit communities by 2030, it must first address the severe housing shortage across the Inuit homeland.

That’s one takeaway from a new study published by the Journal of Epidemiology and Community Health, which concludes that “in addition to strong screening and treatment programmes, alleviating the chronic housing shortage will be a key element in the elimination of TB in the Canadian Inuit Nunangat.”

Among the researchers involved with the paper is the Ottawa Hospital’s Gonzalo Alvarez, who is collaborating with Inuit Tapiriit Kanatami on a project called Taima TB, which aims to help Inuit in Canada stop the transmission of tuberculosis in their communities.

The Ottawa Hospital’s Dr. Gonzalo Alvarez and Natan Obed, President of @ITK_CanadaInuit, are collaborating on Taima TB, an initiative that aims to help Inuit in Canada stop the transmission of #tuberculosis in their communities. https://t.co/X89qp7oHus pic.twitter.com/8t4UtedL0F

In 2011, Taima TB offered door-to-door screening and treatment of TB in five areas of Iqaluit considered to be high risk, based on past active cases of the disease. During those visits by a nurse and a “TB champion” who spoke Inuktitut, a questionnaire was administered, which yielded the information that the study is based upon.

The results, based upon the answers from 261 respondents, offered further proof that TB and poverty often go hand-in-hand.

Among the respondents, most of whom were Inuit, 67 per cent had not completed high school. Nearly half had incomes of less than $20,000. Nearly a third sometimes went hungry. Seventy-seven per cent smoked tobacco and 62 per cent smoked marijuana. And three-quarters lived in overcrowded conditions.

All of these factors have been found to be associated with latent TB infections.

What’s more, when the report’s authors controlled for most of these factors, they found that increasing age, overcrowded housing and Inuit ethnicity by themselves were associated with latent TB infections.

The report notes that a housing study, conducted at the same time, found that five per cent of Iqaluit’s population at the time—about 380 people—”was in immediate need of housing and was living temporarily in another person’s dwelling.”

About three in 10 dwellings, meanwhile, housed temporary residents without a home in the 12 months prior to that survey.

The TB study found that Inuit ethnicity is the strongest determinant of having a latent tuberculosis infection, with Inuit having two to three times the risk as Canadian-born non-Indigenous people. Another study in Greenland drew similar conclusions.

“Those tentative findings may suggest a genetic susceptibility to TB among Inuit and may partly help to explain the high rates of TB in these regions,” the report states.

“At the turn of the century, some of the highest rates of TB ever recorded were noted among the Inuit. It is possible that because Inuit only came in contact with Europeans in the past century, they have not developed genetic mechanisms necessary to protect them against TB disease.

“Evidence exists that people may have genetic signatures that predispose them to develop active TB disease. We agree with other researchers that further study in this area is warranted.”