After months of no improvement, Sanikiluaq flight woes return to legislative assembly 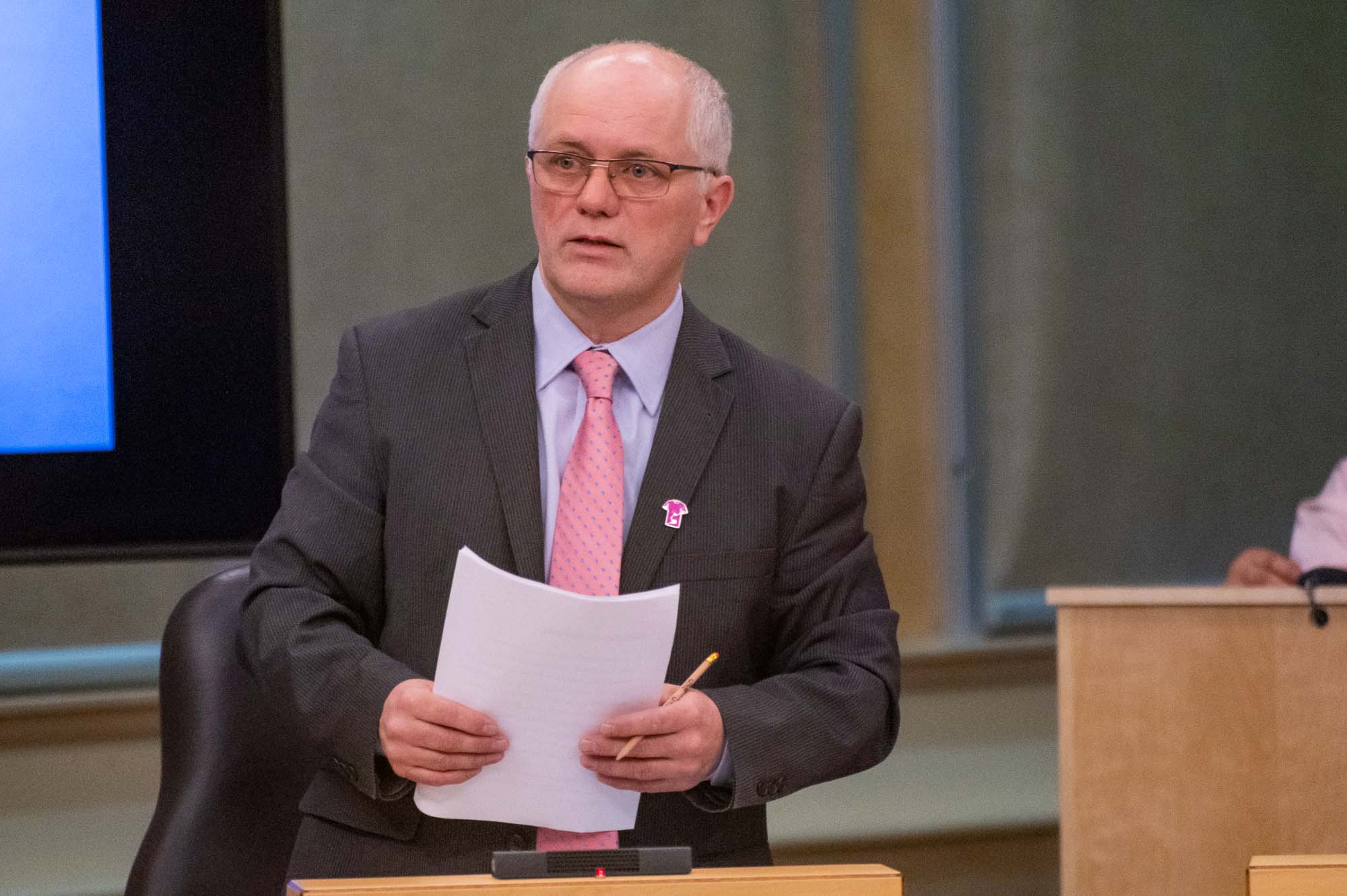 Allan Rumbolt, MLA for Hudson Bay, continued his push for better flight options for residents of Sanikiluaq as the legislature’s winter sitting resumed last week. To travel to any other part of Nunavut, residents must first fly to Winnipeg and isolate for two weeks. (Photo by Dustin Patar)

It has been nearly a year since the residents of Sanikiluaq have been able to travel to any other Nunavut community without having to spend two weeks in isolation at a southern hotel.

That’s because no direct flights exist between Sanikiluaq and any other Nunavut community.

Allan Rumbolt, MLA for Hudson Bay, raised the issue again in the legislative assembly this week, after originally asking for an improvement in airline services to Sanikiluaq in September.

“The lack of scheduled airline services to the community has had a major impact,” Rumbolt said before asking Transportation Minister David Akeeagok for an update during the legislature’s question period on Wednesday.

In his answer, Akeeagok held up the creation of a multi-departmental working group that consists of members of his department, finance, executive and intergovernmental affairs, health and justice departments, as evidence “a lot of good work is happening behind the scenes.”

According to Akeeagok, one option that’s being considered is asking existing airlines to set up a route from Sanikiluaq to Iqaluit with the help of the territorial government.

Another possibility would be rerouting current planes, though Akeeagok indicated that it’s “not an option that we really are pursuing because a majority of it is through cargo.”

In Septebmer, Sanikiluaq Mayor Johnnie Cookie wrote a letter to Akeeagok, asking that he address the issue.

“A direct flight will allow Sanikiluaq to be more effectively included in Nunavut services and policies during this critical time, help reduce the potential for exposure to Sanikiluaq residents and facilitate community resilience,” he stated.

Less than two months later, Cookie’s concerns about the risks southern travel poses to his residents were realized when the hamlet recorded the first cases of COVID-19 in the territory.

Earlier this week, Rumbolt tabled another letter from Cookie, again stressing the importance of a direct connection to the rest of Nunavut.

In that letter, Cookie recounts the story of a Sanikiluaq student whose recent trip between Iqaluit and the hamlet required a two-week stay in isolation, five days of travel and came with a cost of more than $9000. The Nunavut Arctic College student was travelling home to spend Christmas with her child.

Had it not been for a Winnipeg-bound flight with a layover in Rankin Inlet, the student would have had to isolate a second time before returning to Iqaluit.

While Cookie acknowledges that the flight costs were eventually covered by organizations such as the Kakivak Association, he pointed out that at the time, there were government-chartered flights with empty seats that the student wasn’t able to board.

“This practice needs to stop,” he wrote.

Cookie suggests that the territorial government schedule two flights per week — on Mondays and Fridays — aboard small aircraft that would be open to government workers and those who purchase tickets.

Following up on that letter, Rumbolt sought confirmation that Akeeagok would reply and that he would commit to tabling that response.

Although Akeeagok didn’t have a written response completed at the time, he did acknowledge that a draft response was being worked on and would be tabled as soon as it was complete.

“I’m hoping that that letter will be very positive to you and to your mayor on what next steps will take place in terms of air travel for Sanikiluaq,” said Akeeagok.