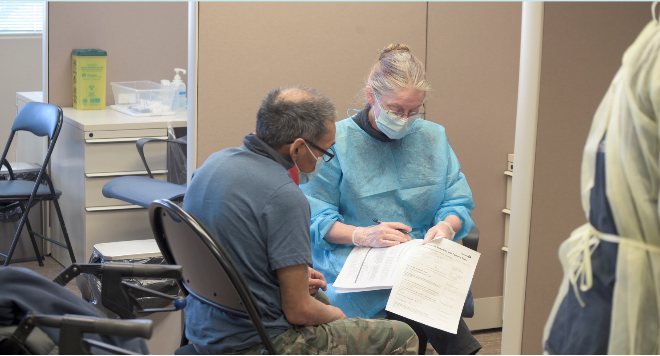 The Akausivik Inuit Family Health Team in Ottawa is updating its COVID-19 vaccination database after patients discovered they were not automatically registered in the provincial database.

Some said they were turned away from indoor spaces in Quebec when they tried to enter with their original handwritten vaccine receipts issued by the Akausivik health centre.

Akausivik said it is now working to resolve the situation.

“Some [patients] who were vaccinated early in the rollout received a receipt signed by a physician or [one] without the Ontario ministry logo on it,” explained said Dick Gordon, a representative of Akausivik. “We are re-issuing receipts for those that need one with the ministry logo and no handwriting.”

Crystal Martin-Lapenskie is an Inuit advocate and was vaccinated at the centre. She said when she tried to access her proof of vaccination online, she discovered she wasn’t registered in the provincial system.

“I immediately began contacting [Akausivik] but was never given clear directions on what I could do,” she said. Eventually she was added to COVAX after contacting her regional provider, Ottawa Public Health, and showing a printed copy of her original vaccination receipt, she said.

Gordon said while the Ontario system is in the process of implementing an enhanced vaccine receipt, the centre is now working to transition anything needed from its own database for the enhanced document.

Gordon added that Ontario has confirmed that hard-copy vaccine receipts will remain valid after Oct. 22 when the province is expected to implement its new app and QR code system for proof of vaccinations.

The Akausivik health team has administered over 8,200 doses to date after a targeted campaign reached out to members of Ottawa’s Inuit community in the spring and summer. One of the centre’s earliest patients was Governor General Mary Simon, who received her first dose of the vaccine on March 10. Simon also took part in a video campaign that same month, urging other Inuit to get vaccinated.

Nunatsiaq News reached out to the Governor General’s office to confirm if Simon is registered in Ontario’s database as being fully vaccinated but did not receive a response.

As for when patients who were vaccinated at the centre will be fully registered in the provincial system, Gordon said they “will have a better idea of timeline when processes and logistics of enhanced certificate is confirmed.”

“Many Inuit are facing targeted discrimination already in the health-care field. What if they didn’t know about keeping their documentation? What if they lost it? What if they did not understand the need to carry this proof because of the lack in transparency?” she said. “By not entering this into the database, Inuit are facing increased risk of discrimination and potentially being turned away for care or supportive systems they need.”

Martin-Lapenskie said she decided to share on social media how she was able to get her proof of vaccination in hopes that others will be able to do the same.

Akausivik says that clients who are seeking a reissued receipt should contact them at 613-740-0999 or generalinfo@aifht.ca.