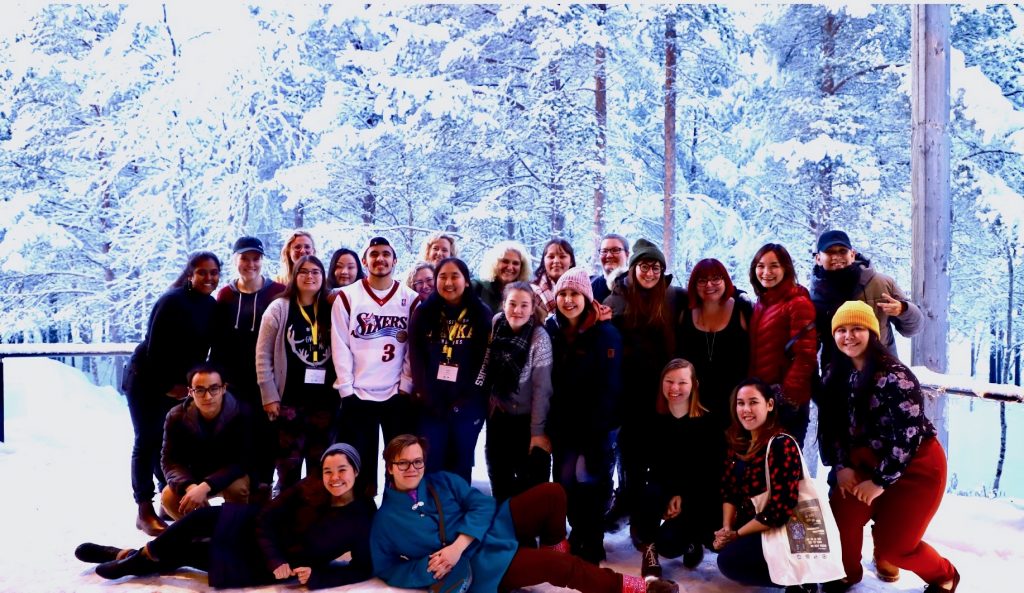 Here are the youth participants of Project CREATeS—which stands for Circumpolar Resilience, Engagement, and Action Through Story—when they met in February 2019 at a workshop in Inari, Finland. The Arctic Council received a report on the project at the May 7 ministerial in Rovaniemi. Finland. (Photo courtesy of CREATeS)

A report on an Arctic Council project, which was tabled at the council’s May 7 ministerial meeting in Rovaniemi, Finland, aims to provide a better understanding of how to prevent suicide among youth in the circumpolar world.

The 130-page report of Project CREATeS—or Circumpolar Resilience, Engagement, and Action Through Story—focuses on films made by youth in workshops in Canada and Finland.

However, the report lacks some important information: there are no working links in this online report to the 30 digital stories produced from 2017 to 2019 by its youth participants, aged 18 to 30.

Because of the lack of links, readers must take the report’s word that the project was worthwhile and that the stories told by youth revealed insights about resilience, risk factors for suicide and suicide prevention.

These insights touch on Indigenous identity, political and environmental risk factors, and early-life adversity and the importance of their land, language, and cultural knowledge for wellness and healing.

“The youth depicted their anxieties and hopes for the future, demonstrating also that colonization and intergenerational trauma are not contained within the past, but also shape the future,” the report said. “Without stemming language, cultural and land loss, these youth worry about what it will mean to be Inuit, Gwich’in, Iñupiat, or Sámi, in the future.”

Among other things, their stories spoke either directly or indirectly about the importance of nurturing children, and of the impacts of adversity and developmental trauma, including sexual assault, neglect and being exposed to parental substance use.

The report describes the stories as “replete with the youths’ personal photographs and video of their home/land.”

“The” land is often described in more personal terms, such as “our” land, it said.

One story cited in the report features footage of a row of Inuit men dressed in traditional clothing walking across tundra with a mountain in the background.

“Being Inuk is one of a kind. No matter how much oppression is pushed done on us, I feel we go back stronger and higher. Being free on the land, being free in your community. No matter how isolated you feel, even when you are down you can always go outside and take a look at the land and just remember what your ancestors have lived for. Powerful. It’s very powerful,” the report states.

The permanent participant organizations of the Arctic Council, which include the Aleut International Association, the Arctic Athabaskan Council, the Gwich’in Council International, the Inuit Circumpolar Council and the Saami Council selected the youth to attend workshops in Ottawa and Inari, Finland.

Eventually these will lead to a curated exhibit that will be linked to the Arctic Council and sustainable development working group websites, and interested permanent participant websites, the report says.

Then you will be able to see the digital stories of youth who provided consent to have their films posted on a social media platform.

The project will also become a short documentary film and even an academic publication.

The report suggests the Arctic Council’s suicide prevention work should focus on the implementation of suicide prevention strategies, and recommends several actions, which are not novel, such as finding community members who understand resources for care and who can provide support in a crisis and increasing “self-determination, ownership for safety and well-being, and community ability to address suicide.”

The project was designed to build on a previous Arctic Council project called the Rising Sun, carried out when the United States chaired the council between May 2015 and May 2017, which also included a get-together in Iqaluit.

It led to a report at the ministerial in Fairbanks aimed at providing Arctic communities with better suicide-prevention know-how through a web-based toolkit.