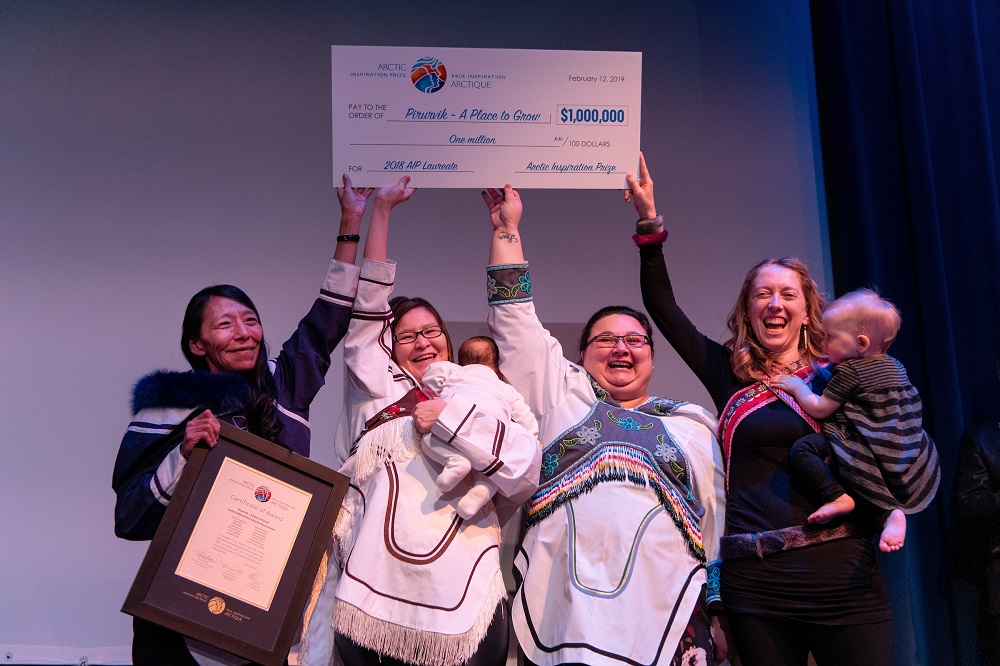 The early childhood educators behind the preschool program Piruvik: A Place to Grow celebrate their $1-million win at the 2018 Arctic Inspiration Prize ceremony held in Whitehorse on Feb. 12, 2019. (Photo by Alistair Maitland/AIP)

Eleven northern projects have been selected as finalists for the eighth annual Arctic Inspiration Prize.

The two finalists in the $1-million prize category are both at least partially based in Nunavut.

One of those finalists is Imaa, Like This: Children and Youth Expressing Themselves Through Music.

Imaa, Like This would operate as a free daily after-school music program and “would offer youth access to culturally relevant music education in a safe and nurturing environment,” the release said.

Imaa, Like This was nominated by Adam Arreak Lightstone, MLA for Iqaluit-Manirajak.

The other $1-million finalist is Northern Compass, which aims to help northern youth aged 15 to 25 in Nunavut and the Northwest Territories successfully transition from high school to post-secondary education and “onto fulfilling careers through pathways relevant to their cultural context.”

“These pathways will address the central problems preventing success: lack of information, absence of relevant tailored transition supports, no centralized system investing in youth success, and young people lacking the confidence and ability to navigate these foreign systems,” the release said.

Those supports would include trained coaches, accessible resources, on-campus programming and more.

The project is led by Karen Aglukark, a student at the University of Ottawa; Rebecca Bisson, executive director of Northern Youth Abroad, Lois Philipp, founder of Northern Loco; and Jim Snider, vice-principal of Elijah Smith Elementary School in Whitehorse. It was nominated by David Joanasie, the MLA for South Baffin.

Other projects include Susan Aglukark’s Kamajiit program, which is a finalist in the $500,000 category.

Kamajiit would offer before- and after-school programs for youth that would include access to healthy food, hygiene products, shower and laundry facilities, and hands-on creative learning activities grounded in Inuit culture and language.

“The art therapy-style sessions would teach self-expression, exploration and pride through creative activities. Youth would also have access to mentors and local job opportunities,” the release said.

The project was nominated by Michael Gordon, director general of the Kativik Regional Government.

Another finalist in the $500,000 category is the Nunavut Law Program, nominated by Lorraine Thomas, vice-president of Imaituk Inc.

In the youth category, which has a prize of up to $100,000, the Baffin Youth Project, nominated by Paul Crowley of the World Wildlife Fund, would see a group of youth complete a 14-day dog-sledding expedition from Iqaluit to Kimmirut and back.

“The long-term vision for the program is to expand to other land-based adventures. Expected outcomes would include improved mental health for youth participants, the transfer of traditional knowledge between elders and youth, and creating economic opportunities for local businesses,” the release said.

“This project aims to protect Indigenous culture and foster stronger, healthier communities through its promotion,” the release said.

The Arctic Inspiration Prize winners will be announced at a ceremony at the Shaw Centre in Ottawa on Feb. 5, 2020.